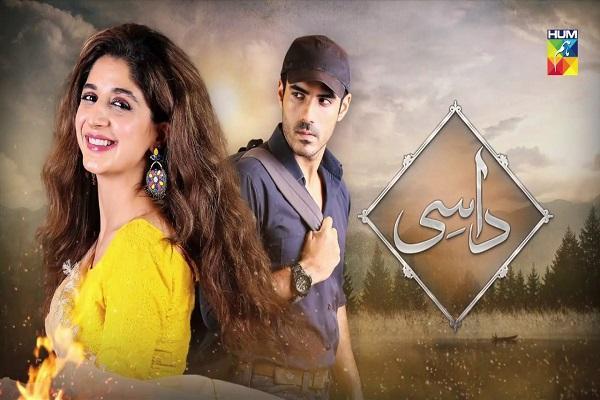 Daasi the drama serial airing on HUM Tv is getting more and more intense. The plot is brilliantly written by Misbah Nousheen. Mawra Hocane and Adeel Hussain are very brilliantly playing their roles and their onscreen chemistry is so lit. Sunheri is staying strong in this play and Aahil is facing challenges at his business even her mother is not at his side.

The episode begins when Aadil and Aaliya are getting married, they had a simple nikkah ceremony Aahil attends their wedding ceremony and Sunheri is watching all this from her rooftop. The scene where both eyes meet is so emotional. Aahil wishes them all and leave the place. Then Aadil at his wedding night gives Aaliya a reality check! Yes, he is pretending to be a lover and win her trust, he is actually plotting to take revenge for his insult.

Aadil slaps hard on Aaliya’s face at his Wedding night and tells her that the rest of her life is to be like that she has to do whatever he says and she should not expect any love from his side. He will take revenge for that insult he faced on that day. Aaliya feels like all her world turns upside down. It seems that Aadil has not believed that she had told him about Sunheri as he is behaving normally with Sunheri.

Aahil is facing great challenges in the office as he can clearly see that Touqeer is putting their company on the verge of bankruptcy. He tries to raise objection on his proposal in a very professional way but his own mother is not standing with him, she is blinded with Tauqeer’s so-called friendship she says that she is not going to support Aahil in anything against Tauqeer. Well once again Aahil is standing against her mother.

Aahil has fully realized that Tauqeer is not their well-wisher, in fact, he is the one who is stabbing at their back. He is merely an employee and now he has 50% shares in the company! Well, one wonders after knowing this all Why Aahil nicely talks with Tauqeer’s niece. Sunheri is staying strong in the difficult situation her mother is too worried and scared when he hears about Shahabuddin but Sunheri says that everything is going to be okay. Sunheri is being a brave girl she has planned that she will work hard and she has also put an ad for renting the room.

tweet
Share on FacebookShare on TwitterShare on PinterestShare on Reddit
Rameeza NasimJanuary 7, 2020
the authorRameeza Nasim
Rameeza Nasim, a Paralian, poet, passionate about poetry, drama and fiction. By giving drama critiques I feel like I am endorsing the writer's message to the audiences and also stressing on what Writers trying to say through his character portrayals and story, I love my job. Being a critic responsibility lies on my shoulders to point out the flaws and shortcomings of the play be it on writer's , performers or director's end . I did my Masters in English Literature and Linguistics and I earn my living through writing.
All posts byRameeza Nasim