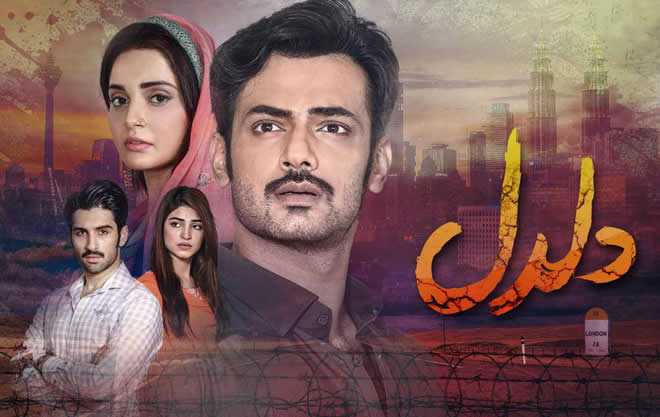 Armeena and Zahid Ahmed were the stars of the show

The top trending drama serial who raised many social issues, Daldal, finally ended yesterday. The much hyped last episode held everybody in its grip till the very last, because one could not anticipate the end with so many unpredictable twists and turns thrown in the way.

The ending scene was, however,  a sigh of relief because Shuja managed to save his family and Hira, gave in to her immense love for her husband. The ending sequence had us applauding for Armeena, because she portrayed the undecided, confused yet angry woman to perfection. The cluelessness was evident on her face. The scenes where Hira had flashbacks of her life with Shuja, Armeena nailed each one of them without having to use dialogues. Zahid Ahmed, is the actor par excellence and he’s proved once again with his performance in Daldal.

Although Hira was reluctant but her mother sent a notice from court to Shuja’s house which was received by Shuja’s mother and sister. The family was shocked. Here Asma Abbas’s reaction as the OTT mother  was picture perfect. This woman, still blamed Hira for everything that was befalling her, not for a moment considering it was her own fault.

Shuja is deported back to Pakistan, after he meets and finds out Hira’s father is still alive. The man has been involved in a drug racket and he advises Shuja to return home as there is nothing for illegal immigrants in a country that spares no one. Daldal has managed to depict the ruthlessness of a foreign country and life of illegal immigrants to perfection. The parting note Shuja shared with Hira’s father were the crux of the entire drama, focusing on how one can earn a respectable living in their own country without having to sacrifice live and love for all the embarrassment that befalls them abroad.

Kudos to the writer of the play Qaisara Hayat who very intelligently raised such social issues which need to be addressed with an engaging story. The play ended with a reunion of Shuja and Hira and their family. While this was a drama, all doesn’t really well for people who suffer from illegal immigration and the problems it brings together. Daldal was an effort to raise awareness about human trafficking, we hope its done some of its part.

tweet
Share on FacebookShare on TwitterShare on PinterestShare on Reddit
Rameeza NasimFebruary 9, 2018
the authorRameeza Nasim
Rameeza Nasim, a Paralian, passionate about poetry, drama and fiction. By giving drama critiques I feel like I am endorsing the writer's message to the audiences, I love my job. Being a critic responsibility lies on my shoulders to point out the flaws and shortcomings of the play be it on writer's , performers or director's end . I did my Masters in English Literature and Linguistics .
All posts byRameeza Nasim