Dil-e-Momin Ep-17 Review: Momin’s trust on Aashi is not shaken as Fakhar tries to create doubts 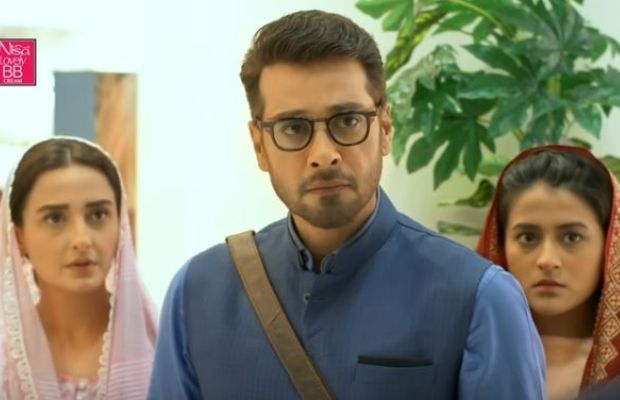 Dil-e- Momin the 7th Sky Entertainment production is now 17 episodes down, this week instead of airing double episodes only a single was aired. In the previous episode we have seen that Momin and Aashi miraculously gets engaged. In this episode it is shown that Fakhar tries to create misunderstanding and doubts in Momin’s mind but his trust on Aashi is not shaken. He fully trusts Aashi.

Aashi and Momin are happy with their new relationship status, for Aashi is just like a dream which has come true. She apologizes Momin’s sister Fari for her past attitude. Momin’s family is more than happy and welcoming towards her. Fari takes Aashi on shopping as her wedding date is also fixed and she is marrying Momin just a day before Fari’s wedding.

In the shopping mall Aashi’s way crosses with Fakhar, she gets scared on seeing him. Fari sees him too she encourages Aashi to move on but Fakhar stops their way and starts teasing them but he is stopped by Momin who out of no where appears coincidentally at the shopping mall. The world in dramas is so small that people coincidentally meets each other everywhere everytime. Momin starts protecting Aashi and his sister and tells Fakhar to shut up.

Fakhar has realized that he is Momin so he starts demeaning Aashi accusing her that she has come on a date with Momin. Momin loses his cool on Fakhar’s remarks and they started having a brawl when security guys come and they resolved the matter. However before leaving Fakhar tries his best to create doubts in Momin’s heart for Aashi by saying that she is a very clever girl she used to talk with him on phone at night and he has also come to her place when she is alone.

Aashi is terrified on hearing Fakhar’s accusations, she is fearing that what Momin is thinking about her more than she really wants to share with Momin the whole truth what actually happened to her why her father agrees to marry her off to him. Aashi wants Momin to hear the whole thing and for that she sends her mother to talk with Momin. Momin clearly tells his Khala that he blindly trusts Aashi and his trust is not shaken a bit by Fakhar’s nonsense accusations. Maya on the other hand is still hopelessly in love with Momin despite of Momin’s continuous shunning her she is still after him. Will Maya let Momin marry Aashi so easily?

tweet
Share on FacebookShare on TwitterShare on PinterestShare on Reddit
Rameeza NasimJanuary 11, 2022
the authorRameeza Nasim
Rameeza Nasim, a Paralian, passionate about poetry, drama and fiction. By giving drama critiques I feel like I am endorsing the writer's message to the audiences, I love my job. Being a critic responsibility lies on my shoulders to point out the flaws and shortcomings of the play be it on writer's , performers or director's end . I did my Masters in English Literature and Linguistics .
All posts byRameeza Nasim