Maya is still desperately in love with Momin 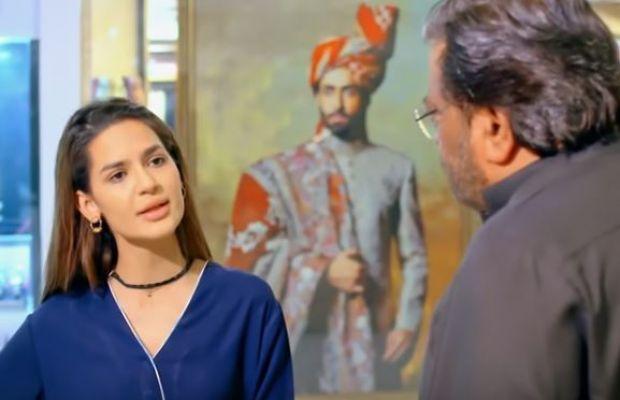 Dil e Momin the drama serial airing at GEO Entertainment is getting intense. Performances are on point. In the previous episode, we have seen that Fakhar tries to create doubts in Momin’s mind but Momin’s trust in Aashi is not shaken. In this episode, Maya is creating serious troubles for Momin, and because of her Aashi doubts Momin.

The world is too small in our dramas. Momin goes for his wedding shopping at a mall and coincidentally Maya goes to the same mall. She is desperately in love with Momin which is not making any sense at all. Despite him ignoring her Maya is clinging to him. At this stage, her behavior is of harassing, it’s simply a toxic obsession.

As I said the world is shown too small in our plays, Aashi’s father is present at the same mall. He sees Maya being so close to Momin clicking a selfie with him. However, there is no sign of happiness on Momin’s face and that selfie is also forced but Aashi’s father gets worried. He goes to Maya and starts inquiring about her and her relationship with Momin. Maya here being too mean and selfish tells Jameel that Momin is not happy with this engagement, his happiness is with her.

Jameel starts doubting Momin, not for a single moment he has realized that Momin was not even smiling when he is with her. He is all the time avoiding her. However, Maya has successfully sown seeds of doubts in Jameel’s mind. Despite talking directly with Momin, he shares his concerns with every other person and the worst he does is that he shares it with his daughter Aashi too. Initially, Aashi shuns all this but later her heart is filled with doubts and she calls Momin right at that moment Maya comes and starts talking with Momin.

Aashi starts doubting Momin after hearing Maya’s voice then when Momin cuts her call she gets even more disturbed. Maya is creating serious troubles in Momin’s life. Aashi later tells Momin about the girl who is claiming that she loves Momin and she has also told her father that Momin is not happy with their engagement. Momin is super angry with Maya but he cannot find her anywhere he goes to his place but instead of silently coming back he should have complained to her mother about her behavior. It seems that Maya will be going to create further troubles in Momin and Aashi’s relationship.

tweet
Share on FacebookShare on TwitterShare on PinterestShare on Reddit
Rameeza NasimJanuary 18, 2022
the authorRameeza Nasim
Rameeza Nasim, a Paralian, passionate about poetry, drama and fiction. By giving drama critiques I feel like I am endorsing the writer's message to the audiences, I love my job. Being a critic responsibility lies on my shoulders to point out the flaws and shortcomings of the play be it on writer's , performers or director's end . I did my Masters in English Literature and Linguistics .
All posts byRameeza Nasim