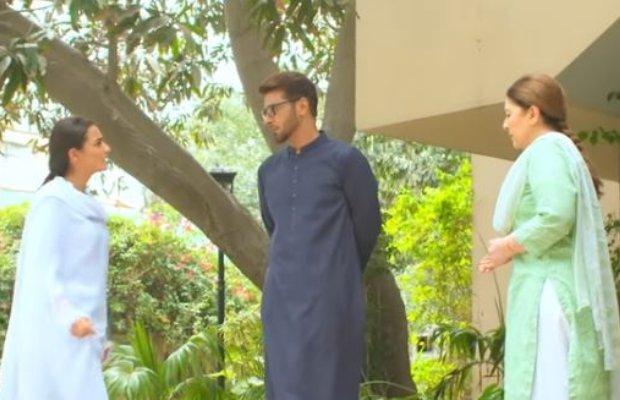 Dil-e- Momin the 7th Sky Entertainment’s production at Geo TV  is an interesting watch. With Faysal Qureshi’s and supporting casts’ power-packed performance. In the previous episode, we have seen that Momin goes to Maya’s house to convince her for joining back her studies and Gohar starts creating a fuss over it. In this episode, Momin finds himself helpless in saving Aashi from marrying that loafer Fakhar.

Momin’s sister Ainee is still worried about Gohar’s threats and she is keeping it to herself that is why she seems so lost and disturbed. When Fari asks her what is worrying her, she shares her experience of getting across with a stranger who is spitting venom against their brother saying that he is having an affair with his student. Fari assumes that it is Fakhar who harassed her sister. She also shares it with her fiance.

Maya is getting upset over Sir Momin’s rudeness when she learns through her mother that she is the one who told Gohar about Momin’s visit to her house actually she wants to complain about it but then Gohar says to her that he can handle it himself. Maya gets mad when she hears about it she gets to the gist of the matter. She has realized that it is Gohar who has misbehaved with Sir Momin and he is the one spreading rumors about him at the university. Maya badly insults Gohar in front of all his friends at the campus.

Aashi’s fiance Fakhar comes to her place and he is getting too cheesy with her. Later then he complains to Aashi’s father for Aashi’s rude behavior with him. Aashi’s mother calls Momin to her place and begs him to save her daughter from marrying that loafer. Momin feels so helpless in this case. He is extremely disturbed to know that he cannot go against Aashi’s father.

Momin discusses his helplessness in front of his parents, he even cried in front of them. Momin’s father has made up his mind that no matter what will happen he will going to convince Jameel for Momin and Aashi’s nikkah. He even goes to convince Jameel but his efforts go vain as Jameel is not ready to listen to him. Aashi’s father even tries to engage Molvi Sahab he tells him the only favor he can do for him is that he will do his Friday Sermon on the rights of the daughter and the importance of her consent in marriage. Will Jameel’s heart ever get melted for Momin? Fari’s fiance sees Fakhar coincidentally on the road, he snubs him and threatens him that if he ever harassed Ainee he will call the police. Fakhar is totally confused but he will surely discuss this encounter with Jameel.