Momin's father takes this digrace to his heart and dies 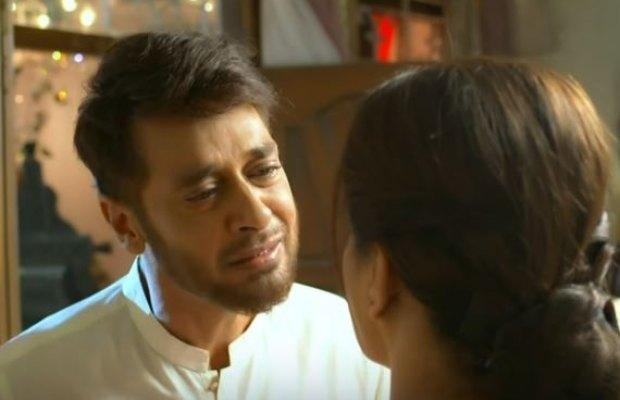 7th Sky Entertainment’s productions Dil e Momin has turned more and more depressing. The play has turned out to be a disappointment with so carelessly handling this harassment scenario and false accusation. That accusation has completely ruined Momin’s life and reputation. In the previous episode, we have seen Maya wrongly accusing Momin of sexual harassment. In this episode not only Momin but his family is also paying for the sin Momin hasn’t even committed!

Momin fails to convince his family of his innocence. No one believed him not a single person. Maya has completely ruined Momin’s life and reputation with her lie. Strangely Maya is not even feeling guilty over what she has done with Momin, not for a single moment, she has shown regretting or just realizing what damage her lie has caused.

Aashi who claims to love him the most is the first to disbelieve him. Momin used to blindly trust her when Fakhar tries to create doubts in his mind. Now when Momin is trying hard to make her believe that he is being trapped no one including his own family is ready to believe him. We are hating Maya for this and she should not be redeemed for this, she should face the consequences of her sin. She deserves punishment.

This false allegation has not just damaged Momin only but his family members are also paying for the sins Momin has not even committed. Fari’s mother-in-law comes and she calls off the wedding excusing that her family is pressurizing her even her son has not come along with her. Momin pleads with Waleed’s mother not to call off the wedding, he says that once reality will get exposed and then you all will going to regret it badly. Momin says that he will go to talk with Waleed too. Even Momin’s sisters are not ready to believe him.

Momin goes to Waleed’s office and there he begs him not to break this relationship but Waleed in a very respectful manner tells him that he cannot say no to his mother, her mother is under their family pressure. It seems that Waleed is kind of convinced by Momin’s explanation and then Waleed receives a call that Momin’s father has passed away. Momin’s father takes all this disgrace to his heart and on top of that Aashi’s father’s reminder of his promise also breaks him and he dies. With causing so much damage will Momin ever be able to forgive Maya? Do you think Maya deserves to be forgiven?

tweet
Share on FacebookShare on TwitterShare on PinterestShare on Reddit
Rameeza NasimFebruary 1, 2022
the authorRameeza Nasim
Rameeza Nasim, a Paralian, passionate about poetry, drama and fiction. By giving drama critiques I feel like I am endorsing the writer's message to the audiences, I love my job. Being a critic responsibility lies on my shoulders to point out the flaws and shortcomings of the play be it on writer's , performers or director's end . I did my Masters in English Literature and Linguistics .
All posts byRameeza Nasim