Gohar hits Momin with his car 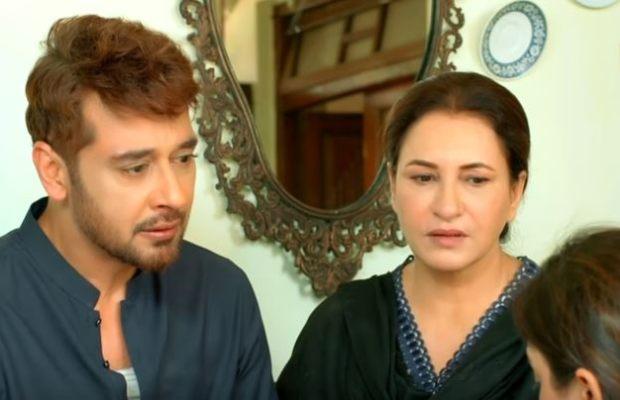 Dil e Momin the drama serial airing at Geo Entertainment seems to be moving towards its conclusion. The play has taken a twist in this episode with Maya’s confession of accepting her sin and validating Momin’s character in front of his family. Madiha Imam and Faysal Qureshi have given power-packed performances. In the previous episode, we have seen that Maya accepts her mistakes in front of her mother and Waleed.

Maya is recalling Waleed’s words that ‘at least tell Momin’s family about your lie’. Maya gathers the courage to go to Momin’s place. Momin’s mother treats her like a real victim and it is making her even more embarrassed. Maya tells her that she has wrongly accused his son of harassment he has not done anything bad with her. She further validates Momin’s character in front of his mother and sisters.

Momin’s mother and his sisters are shocked at this revelation. They are gathering the courage to face Momin. Momin meets Darwesh on the street and he tells him that his forgiveness is granted. Momin is on his way back home when Gohar hits him with his car and runs away. Poor Momin is lying on the road but one wonders who takes him to such a nice hospital where he is treated so well that too only for Rs7000!

Maya finds about Momin’s accident through her friend she visited the same hospital to see her relative there. Maya rushes to the hospital and she takes care of Momin. Momin’s taking a ride in Maya’s car is going so much out of the character! How can he accept any favor from Maya after what she has done with him and his family?

Aashi simply does not deserve Momin! after Fari has told her about Maya’s confession she is still not ready to believe Fari. She does not deserve Momin, Momin should marry Maya as she has redeemed herself by confessing her sin to the world. One of the major flaws of the play is that when Aashi’s father has met Maya in the shopping mall he should have gotten the idea that Maya is after Momin then why like Waleed, he is not getting that Momin is innocent? Why he is letting her daughter marry someone who once tried to rape her daughter? Pathetic narrative!