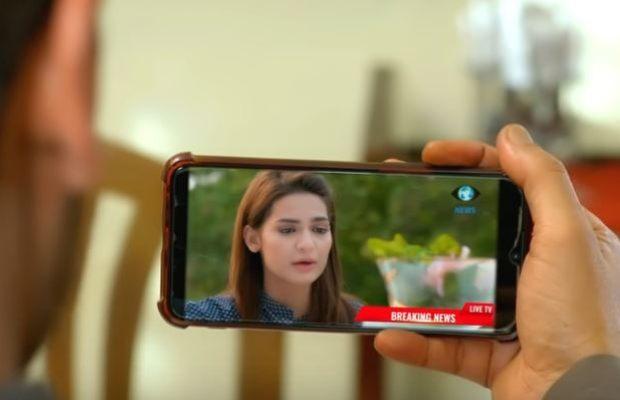 Dil e Momin the 7th Sky Entertainment drama serial airing at Geo Entertainment has taken a drastic turn. The story has now moved towards Maya and her process of redemption. Performances are on spot. In the previous episodes, we have seen that Maya validates Momin’s character in front of his mother and sisters. In these episodes, Maya on airs her apology and bears its consequences.

The episode begins when Maya has released her apology video in Public validating Momin’s spotless character in front of the whole world. Well, little does Maya knows that now she has to pay a heavy price as a consequence. Maya’s mother knows that, the step taken by Maya will going to create a lot of problems for them, how they will going to face the world? Maya’s mother takes all of this to her heart and dies.

With Maya’s mother’s death, Maya’s penance begins she is getting redeemed, she lost her mother and also lost her friend’s trust. Even Gohar is little reluctant towards her but she wants him to stay and she expresses her grief with him. Momin’s mother has realized what a big step Maya has taken for Momin at the cost of her own honor, she has realized how deeply Maya loves Momin but Momin is not ready to even hear her name.

Well, one wonders why Fari has not sent that apology video link to Aashi on time instead of going there with Momin right at the Wedding scene. It is such a typical and filmy scene but it goes out of character for a pious person like Momin to go and spoil anyone’s wedding after all its matter of Aashi’s honor too. As already mentioned before, we think Aashi does not deserve Momin at all like she has no faith in him from Day one. Well, one feels sorry for Aashi.

Fakhar’s character is not making any sense, at one time he was so desperate and lecherous that he even attempted to rape Aashi when she was merely his fiance, and now when she has become his wife he leaves her at her wedding night saying that he does not even find her worthy enough to think about her. He says that he has married her for her mother and says that he will punish her and her parents. He leaves Aashi untouched at her wedding night and leaves for abroad. And we wonder what kind of revenge is this?

tweet
Share on FacebookShare on TwitterShare on PinterestShare on Reddit
Rameeza NasimMarch 1, 2022
the authorRameeza Nasim
Rameeza Nasim, a Paralian, passionate about poetry, drama and fiction. By giving drama critiques I feel like I am endorsing the writer's message to the audiences, I love my job. Being a critic responsibility lies on my shoulders to point out the flaws and shortcomings of the play be it on writer's , performers or director's end . I did my Masters in English Literature and Linguistics .
All posts byRameeza Nasim