The play is giving quite a problematic message. 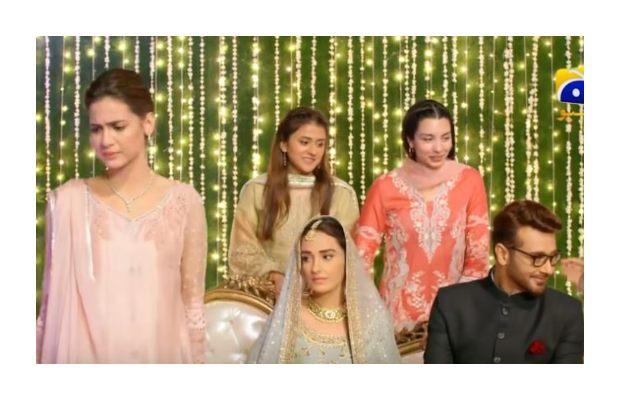 Dil e Momin the 7th Sky Entertainment production is  43 episodes down and seems too much stretched for a serial the story must have got wrapped up by now. Performances are on spot. In the previous episode, we have seen that Maya convinces Aashi to accept Momin. In this episode, Momin marries Aashi with Maya’s consent. The play is giving quite a problematic message.

Maya has reached another level of greatness she not just convinces Aashi to meet Momin. She also allows Momin to marry Aashi happily making us wonder that is the same Maya who was used to be so desperate for Momin that she has crossed all her limits. Now she is all set to take Momin’s baraat. Well to some extent there is quite problematic messaging in these episodes.

Doosri Shadi is being tried to normalize in our drama serials for quite a time in fact it is the favorite theme of our plays. In Dil E Momin too is trying to normalize the concept of a second marriage and initially, it has tried to show it in a good light but then we have seen that typical Sokan thing might be going to start in the next episodes as Aashi’s father is not happy with Maya. He has schooled her to leave Momin if she really loves him. Will Maya leave Momin?

Well, Momin is quite out of character to marry Aashi and ignore Maya as if she does not even exist. Momin is shown to be righteous and a good Muslim so how can he ignore Allah’s orders. In Islam second marriage is allowed only under one condition and that is to have Adal (Fair dealings) with both of the wives which includes giving both of his wives equal time. Momin is not being fair to Maya, he is not giving her his time, and being a righteous and pious person as he is shown to be is his fatal flaw.

We are feeling no sympathy towards Aashi she truly does not deserve Momin at all. How heartless of her that despite knowing how Maya passionately loves Momin she agrees to marry him and how pathetic her parents are that they are still marrying her off to Momin despite knowing that he is married. That Dupatta burning scene is such a typical masala sort of scene and it makes this play a typical soapy material. Well, the ending scene is giving us chills down the spine when Gohar makes his entry into Maya’s house in absence of Momin and his family. It seems that Maya will have to leave Momin. Well in this case it seems that Maya is too good for Momin.

tweet
Share on FacebookShare on TwitterShare on PinterestShare on Reddit
Rameeza NasimApril 13, 2022
the authorRameeza Nasim
Rameeza Nasim, a Paralian, passionate about poetry, drama and fiction. By giving drama critiques I feel like I am endorsing the writer's message to the audiences, I love my job. Being a critic responsibility lies on my shoulders to point out the flaws and shortcomings of the play be it on writer's , performers or director's end . I did my Masters in English Literature and Linguistics .
All posts byRameeza Nasim