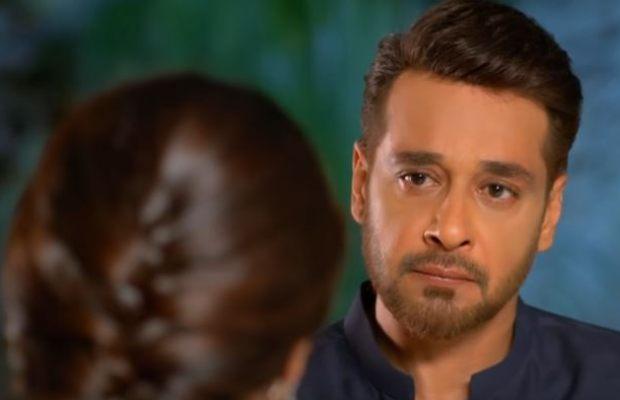 Dil e Momin the 7th Sky Entertainment production is 45 episodes down which is quite a stretch for a play, it seems to turn soapy. The story moves on now based on a typical two-marriage theme.  The play has lost its impact. In the previous episode, Momin marries Aashi with Maya’s consent. In this episode, Maya vanishes from the house and Momin’s life.

Gohar makes his entry back into the play which is making no sense he appears with his wedding invitation card frightening the hell out of Ainee. Well, the way Ainee reacts seems too exaggerated. She saw the guy who sort of harassed her then her immediate reaction is to shut the door why she is letting him come into the house?

Momin has seen Gohar giving Maya invitation card but he also listens to his slander talk he had with Maya telling her that how wickedly she has won her place in Momin’s heart and home. Momin starts thinking that this whole process, Maya redeeming herself and then being so good to him and his family is totally a drama to win him. Momin’s faith in Maya gets shaken and he once again starts judging her.

Momin is so flawed and self righteous that he starts judging Maya’s relation with Allah calling her a hypocrite. He tells her that she is doing all this being good drama in front of him and his family to win him. He also starts accusing Maya of trying to burn Aashi when he before thinks that as merely an accident but now he is accusing Maya that she has deliberately tries to burn Aashi as she wants to take her away from him. Momin is not ready to listen to any of Maya’s explanations he has made up his mind that Maya has plotted all this.

Maya could not stand all this sudden hatred by Momin, she is deeply hurt by Momin’s accusations and his doubting on her. She leaves the house in the middle of the night leaving behind a note where she is wishing Aashi and Momin all happiness. Momin is least concerned to look for her. Everyone at home Fari, Ainee, Momin’s mother and even Aashi is worried for Maya they want Momin to bring her back but Momin is not interested. However it is shown that Momin is neither in peace Maya’s voice is haunting him too. Well, we are wondering where has Maya has gone? Maya has given her house to a trust but then when Waleed goes there it says that it has been sold way before confusing.

tweet
Share on FacebookShare on TwitterShare on PinterestShare on Reddit
Rameeza NasimApril 20, 2022
the authorRameeza Nasim
Rameeza Nasim, a Paralian, passionate about poetry, drama and fiction. By giving drama critiques I feel like I am endorsing the writer's message to the audiences, I love my job. Being a critic responsibility lies on my shoulders to point out the flaws and shortcomings of the play be it on writer's , performers or director's end . I did my Masters in English Literature and Linguistics .
All posts byRameeza Nasim