Maya has stopped attending her classes 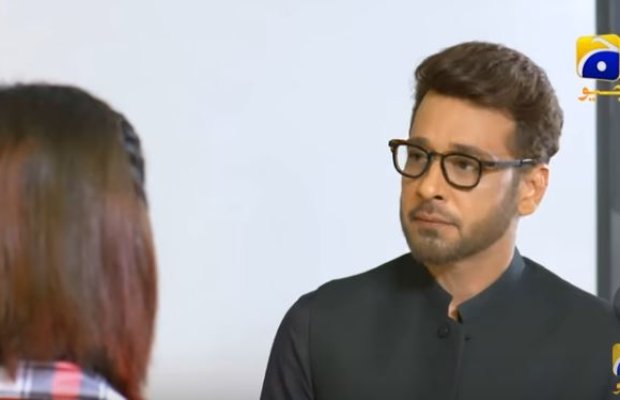 Dil e Momin the 7th Sky Entertainment drama serial airing at Geo Entertainment is one interesting watch but the continuous rendition of the concept of Momin and its attributes seems a bit overly done. It’s good but this notion is a bit exaggerated in the play. In the previous episode, Aashi’s father had refused Momin’s proposal and in this episode, Aashi gets engaged to Fakhar and Momin thinks he is suffering because he has unintentionally broken Maya’s heart.

Momin’s parents are taking this refusal too seriously. Momin’s mother thinks to try one more time to convince his brother in law but she has been made a late entry. When she arrives Aashi is sliding the ring into Fakhar’s (Saad Azhar) finger. Momin’s mother gets heartbroken on top of that Aashi’s father taunts that Fakhar is much richer than Momin and he can also help Momin in settling him abroad.

Aashi is a borderline annoying character, she seems someone who has lost her mind. The way she rudely behaves with her Khala and blames Momin for not doing anything. Well, what she is actually expecting Momin to do? She wants him to elope her away what kind of girl she is? When Momin comes to talk with Aashi’s father telling him that Aashi is not happy with her engagement, Aashi insists Momin take her away with him to which Momin declines.

Maya has left her studies, she is not attending her university classes. Her friends are quite worried for her and they tell Momin about her absence and also tell him that he is the reason why she has left her studies. They request Sir Momin to talk to Maya and convince her to continue her studies. Momin tries to call but then he changes his mind he feels it is not appropriate to call her.

Fakhar the guy whom Aashi is engaged with is quite a loafer guy. Momin’s mother herself witness him harassing a girl in the bazaar. She wants to tell her sister about the reality of Fakhar but then her brother-in-law intervenes and misbehaves with her telling her not to come to his house. Momin is continuously in guilt, he feels the burden of the curse Maya has said to him that he will go through the same pain as her. Molvi’s sahab’s take on seeking forgiveness is quite enlightening and it seems that Momin is going to seek Maya’s forgiveness for unintentionally hurting her feelings.

tweet
Share on FacebookShare on TwitterShare on PinterestShare on Reddit
Rameeza NasimDecember 6, 2021
the authorRameeza Nasim
Rameeza Nasim, a Paralian, passionate about poetry, drama and fiction. By giving drama critiques I feel like I am endorsing the writer's message to the audiences, I love my job. Being a critic responsibility lies on my shoulders to point out the flaws and shortcomings of the play be it on writer's , performers or director's end . I did my Masters in English Literature and Linguistics .
All posts byRameeza Nasim