Dil-e-Momin Episodes 9 &10 Review: Momin is getting into a big mess

Gohar will create troubles for Momin 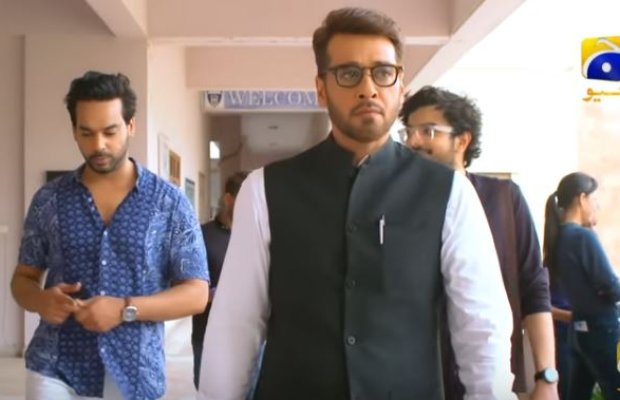 Dil-e-Momin the 7th Sky Entertainment drama serial is becoming more and more intense. Although drama and the character Momin itself are quite stereotyped but still the narrative is interesting. In the previous episodes, we have seen Momin being guilty of his behavior with Maya and in this episode, Momin goes to Maya’s place to convince her to continue her studies but he has no idea by doing that he is getting himself into a bigger mess.

Aashi’s father creates a huge drama at Momin’s house when Fakahar feeds him against Aashi’s khala. Aashi’s father misbehaves with Momin’s parents accusing them of envying his daughter’s engagement and also for creating hurdles in her way. Momin’s mother is wondering that she has not uttered anything against Fakhar still her brother-in-law is creating so much fuss about what would have happened if she had told her sister the whole story.

Momin tries to call Maya but her phone is off so he visits her house. Maya is over the moon to see Sir Momin at her house, she warmly welcomes him. She is being too close with Momin any person may feel uncomfortable but Momin makes no objection, he has gone there to convince her to join back her classes, and also he has gone there to apologize for her past behavior. However, Maya is still getting so cheesy that he has to leave in a hurry without even having coffee.

Maya’s mother sees Momin getting out of her house, she gets upset about seeing him coming to their house and she is even more disturbed to see Maya’s exuberance over his visit. She thinks about complaining about his visit to University but then she calls Gohar and tells him about Momin’s visit. This is the worst thing that happened, Momin is going to get into a bigger mess as Gohar is now going to take all this as a matter of his ego.

Gohar will create troubles for Momin and he has started showing teasers of it. He abducts Momin with the help of his goons just to terrorize him but the worst he has done is that he has terrified his younger sister and also tarnishes Momin’s character in front of her by telling her that his brother used to harass his female students in the university and also that he is having an affair with one of her students and he used to visit her house too. Gohar threatens her too this is the worst thing that happened with Momin. Momin’s true and honest intentions may lead him to a greater mess.

tweet
Share on FacebookShare on TwitterShare on PinterestShare on Reddit
Rameeza NasimDecember 13, 2021
the authorRameeza Nasim
Rameeza Nasim, a Paralian, passionate about poetry, drama and fiction. By giving drama critiques I feel like I am endorsing the writer's message to the audiences, I love my job. Being a critic responsibility lies on my shoulders to point out the flaws and shortcomings of the play be it on writer's , performers or director's end . I did my Masters in English Literature and Linguistics .
All posts byRameeza Nasim