Maheen and Zameer are not ready to accept Mahir 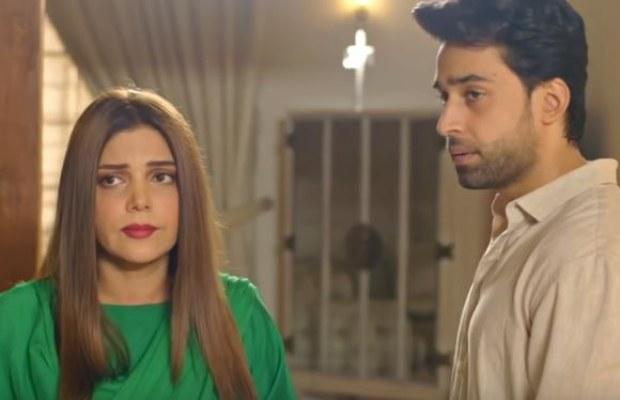 Dobara the drama serial airing at Hum TV is one of the best in the running with its progressive approach. Topped with Bilal Abbas and Hadiqa Kiani’s super brilliant performances and Danish Nawaz’s equally brilliant execution the play no wonder has become our favorite Prime Time Watch. In the previous episode, Mahir and Mehru get nikkahfied. In this episode, Mahir is proving to be Mehru’s Mr.Right so far.

The episode begins when Mahir breaks the news of his nikkah with Mehru’s family everyone is initially shocked then Phupho, Maheen and Zameer start objecting. Maheen is not ready to accept this relationship she walks out with Zameer. Zameer is now fearing that his position in the office might get affected so he thinks to rejoin his own office.

Mahir is currently proving to be Mehru’s Mr. Right as she has the best compatibility with him. He is young, handsome, brave, and daring, and most importantly he is there to support Mehru at every step. That Mou dikaee gift scene is so cute where Mahir gifts his wife glass bangles. Mehru gets a reflection of Hadayatullah where he is not letting her wear glass bangles he insists she wears her gold bangles and also tells her not to apply mehndi on her hands.

Mahir raised a very important question he asks Hidayatullah’s sister that when Mehrunnisa at the age of 16 is getting married to Hidayatullah then why she has not raised any objections? Now if he is younger than Mehru then what’s the big deal in it. They have not committed any sin. In fact, Mahir suggests to go at Maheen’s place and invites her and Zameer for dinner but Maheen is not ready to listen to her mother and Mahir. She simply asks them to leave her house. Mahir and Mehru’s dining scene is also so cute where Mahir is telling Mehru that he is her “Mehboob”.

Mahir also clears Mehru’s misconception that he has not married her for her wealth. He says that he loves her if she lives in a small flat then too he would have fallen for her. Mehru is feeling so special in his presence. Mr. Ibtisaam’s character is so good, he is a gem of a person despite of his bhabi’s feedings he refuses to be part of any fraud or cheating. Mehru is fearing that how she will going to face the world but Mahir comforts her by saying that she has his side. We are simply loving Mahir and Mehru’s pair!

tweet
Share on FacebookShare on TwitterShare on PinterestShare on Reddit
Rameeza NasimJanuary 27, 2022
the authorRameeza Nasim
Rameeza Nasim, a Paralian, passionate about poetry, drama and fiction. By giving drama critiques I feel like I am endorsing the writer's message to the audiences, I love my job. Being a critic responsibility lies on my shoulders to point out the flaws and shortcomings of the play be it on writer's , performers or director's end . I did my Masters in English Literature and Linguistics .
All posts byRameeza Nasim