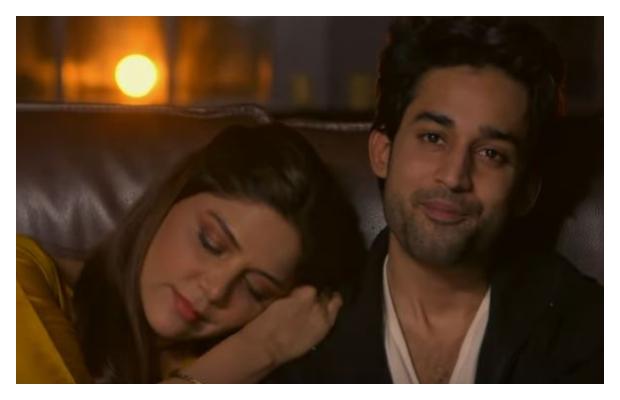 Dobara the Hum TV progressive play is now 15 episodes down, the serial proves to be unique in terms of its content and story. Performances are top notch. In the previous episode Mahir proves to be Mehru’s Mr.Right. In this episode he continues to prove that, it seems that Mahir is very sincere with Mehru.

The chemistry between Bilal Abbas and Hadiqa Kiani is quite lit. Mahir and Mehru seem made for each other but there are people who are envying them. Mehru’s friends are envying her for marrying such a handsome boy who is much younger than her. They are not approving their marriage calling it names and satisfying themselves by saying that the boy is a cheat and he has married Mehru for money and will leave her once he will get money.

Well despite Mahir being nice and sincere, Mehru too believes that he has married her for money and she is also expecting that he might cheat on her at some point she says that Mahir is allowed to cheat as she won’t mind him cheating her. She says that ” Dhoka hi Kahna hay tu Dhoka Dil Faraib hona chahiye” Well this approach is quite confusing it makes Mehru someone who is desperate to marry even to a cheat.

The light romantic scenes between Mahir and Mehru are super cute. The way Mehru is placing her head on her shoulder while watching the movie speaks volumes about their relationship. Mehru tells Mahir to resign from Fareed Company and she is also offering her credit card. The way Mahir refuses her credit card clearly tells us that he has not married Mehru for money. His intentions are clear and sincere. Maheen is still angry with her mother and she is not even picking up her call. Mahir tells Mehru that she will take her time to accept them.

Zameer leaves the office so Mehru asks Mahir to look after her business. Well, one wonders why Mehru herself does not look after her business matters? Mahir is reluctant but he joins her office and there he comes to know about Zameer’s frauds that he has committed during his tenure. The manager tells that Zameer says not to do any business with Fareed Co. because Mehru has not good terms with his wife but later Mahir get to know that Fareed’s wife is Mehru’s only best friend. The episode ends when they both go out shopping and there the shopkeeper refers Mahir as Mehru’s son.

tweet
Share on FacebookShare on TwitterShare on PinterestShare on Reddit
Rameeza NasimFebruary 3, 2022
the authorRameeza Nasim
Rameeza Nasim, a Paralian, passionate about poetry, drama and fiction. By giving drama critiques I feel like I am endorsing the writer's message to the audiences, I love my job. Being a critic responsibility lies on my shoulders to point out the flaws and shortcomings of the play be it on writer's , performers or director's end . I did my Masters in English Literature and Linguistics .
All posts byRameeza Nasim