Mahir is trying to fix everything for Mehru 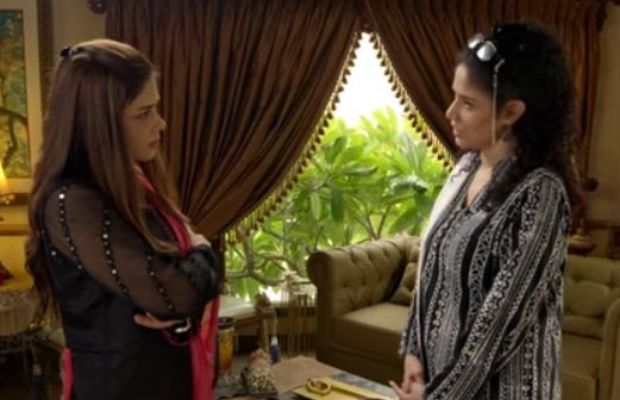 We get to know in this episode that Zameer is not totally an evil person, he is a grey character. His flaw is greed otherwise he still loves his wife and he still stays loyal to her. Although he is having dinner alone with Nadia he is not feeling comfortable nor Nadia is feeling okay in that situation. Unfortunately, Mahir and Mehru see them together in the Cafe.

Mehru is worried for Minaal and her feelings are understandable, she even recognizes that girl, and immediately it is stuck in her head that something is going fishy. Zameer protests to his brother for arranging his dinner alone with Nadia he abjures his idea of marrying Nadia and leaving Minaal. He loves his wife, greed asides his love for his wife is pure. The scene where Minaal is praying for her husband looks so cute.

Performances in this episode are top-notch. This episode as a whole is interesting as it has come with major development in the plot story. We get to know more about Zameer’s character. Mahir is now all set to fix Mehru’s worries. He has called an informal meeting at a restaurant with Zameer. Will he be able to convince Zameer? Or will Zameer be a bit reasonable with his demands? Minaal’s meeting with Mahir in the office is powerful, Mahir’s comic timings and his courtesy are genuine. However, Minaal is not yet ready to accept him. Affan here plays a good role in clearing Minaal’s doubts by offering her to see his father’s letters.

Mahir’s mother is the meanest, although her concerns for Mahir are genuine as a mother, however, her going to Mehru’s place and insulting her is too much from her side. She is adding bitterness to Mehru’s life by telling her that she cannot give her son a child. Not for a second, she has thought that she has abandoned her own child and when her child cannot save her marriage then how come she expects that a child can save marriage? What an irony! Well, Mahir gives a befitting reply to his mother by warning her not to intervene in his matters again and never ever try to bother Mehru. The way Mahir tries to comfort Mehru by saying ” Aap kay Bachay jhootay moun hi baap keh lain tu mere liye yehi kaafi hoga” sounds so cute and then in the end Mahir satisfies the audience by giving another befitting reply to his mother’s husband telling him that yes he married a rich lady, not a middle-class woman who was someone else’s wife and has not broken a home.

tweet
Share on FacebookShare on TwitterShare on PinterestShare on Reddit
Rameeza NasimMay 14, 2022
the authorRameeza Nasim
Rameeza Nasim, a Paralian, passionate about poetry, drama and fiction. By giving drama critiques I feel like I am endorsing the writer's message to the audiences, I love my job. Being a critic responsibility lies on my shoulders to point out the flaws and shortcomings of the play be it on writer's , performers or director's end . I did my Masters in English Literature and Linguistics .
All posts byRameeza Nasim