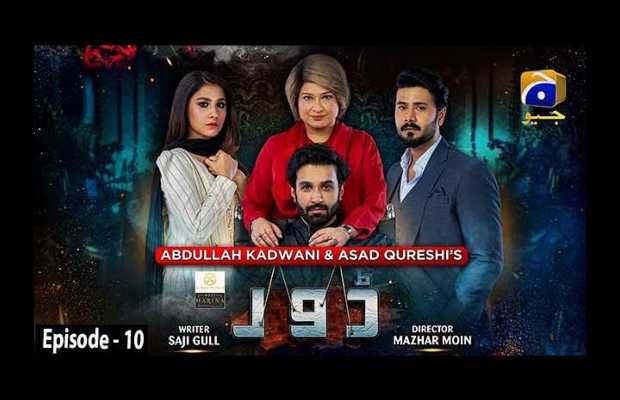 Dour the drama serial airing at GEO entertainment despite having high intriguing value, becomes tedious at some points. Sania Saeed’s powerful performance is the saving grace while other performances are brilliant too particularly Azfar Rehman’s. In the previous episode, we have seen that Asma unknowingly gets engaged to Abhaan. In this episode, Mrs. Etheshaam traps her in her home for Nikkah but she comes to know that she will be marrying Abhaan, not Romaan.

The episode begins when the disgusting Choti Phupho is telling Yasmin to stop her girl from circulating Asma’s engagement news as she is planning a simple Nikkah ceremony at home. Despite it, Yasmin girls spill the beans in front of neighbors and the way they taunt Choti PHupho is quite absurd and it is not making any sense at all.

Mrs. Etheshaam calls everyone at her home for Nikkah. Yasmin raises an argument over the wedding venue but her disgusting phupho stops her by spitting her venom on her. Yasmin is observing her iddat so she cannot attend the wedding. She bids farewell to her beloved daughter at home but Asma makes sure she takes her daughters along despite Choti Phupho’s fierce objections. Little Phupho knows that they will be going to spoil her master plan.

Asma is all set to Mrs. Etheshaam’s place for her Nikkah she sees Romaan at the entrance she smiles at her but he does not smile back. There is an entry of another character played by Haris Waheed, he is Phupho’s son and he comes to surprise her mother but she is not at home and Yasmin is not ready to open the door because she is observing Iddat, well one wonders at least she can tell him the whole story without opening the door, he is her cousin and he deserves to know all the details.

Yasmin girls are playing here and there in the house while playing they accidentally enter Abhaan’s place where he is being angry at his help calling her names. Porochisti gets angry at him too so he spoils Abhaan’s plan by telling the girls that he is your Khala’s bridegroom. The girls are shocked to see him in a wheelchair then Porochisti further asks the girls in private that why they are marrying off their khala to that beast? The girls make their mind to save their khala they tell everything to her that she is going to marry Abhaan, not Romaan. Will Asma agree to marry Abhaan?

tweet
Share on FacebookShare on TwitterShare on PinterestShare on Reddit
Rameeza NasimAugust 10, 2021
the authorRameeza Nasim
Rameeza Nasim, a Paralian, passionate about poetry, drama and fiction. By giving drama critiques I feel like I am endorsing the writer's message to the audiences, I love my job. Being a critic responsibility lies on my shoulders to point out the flaws and shortcomings of the play be it on writer's , performers or director's end . I did my Masters in English Literature and Linguistics .
All posts byRameeza Nasim