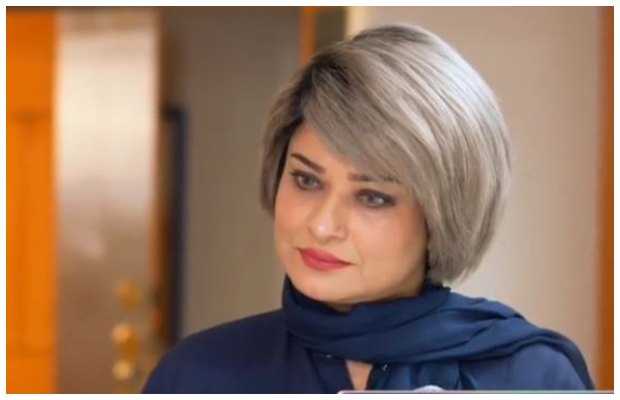 Dour at GEO Entertainment is a drama serial whose intriguing value is very high. Mrs. Etheshaam’s character portrayal is done with such mastery by Sania Saeed that it gets hooked you to the screens there is something quite sinister and mysterious about that lady. In the previous episode, we have seen Mrs. Etheshaam taking interest in Asma and in this episode, we find that she is asking Asma’s hand for Abhaan and also she kills Master Sabir.

Asma’s father and his approach are quite pathetic Yasmin brings her husband to meet Sabir Sahab well Yasmin clearly knows her father’s critical condition and she also knows how vile her husband is then why she takes the risk of bringing him to the hospital? Shoukat as expected shows his true colors to Master Sabir, he starts cursing Yasmin and Asma. Instead of taking his daughter’s side, Sabir Sahab was asking his daughters to apologize but all his efforts get in vain, Shoukat ends up divorcing Yasmin.

Roman tries to share with Mrs. Etheshaam about his marriage plan. Mrs. Etheshaam says she is ready to talk with a lady whose daughter she is interested in for Roman. We get to know that she is not considering Asma. When Roman names Asma she starts bringing all the differences they have, she clearly tells him that she cannot accept Asma as she does not belong to their class. Poor Roman has no choice but to agree with Mrs. Etheshaam and he also apologizes which Mrs. Etheshaam coldly accepts with a slight nod and a hmmm sound.

Roman’s cheerfulness in the following scene is not making any sense, he is being extra jolly despite being sad he tries to entertain his brother and Abhaan insults him in return. One thing is clear that Roman is not the real son of Mrs. Etheshaam. Phupho’s disgusting appearance in the scene where she is blaming Roman for Yasmin’s divorce is so annoying.

Mrs. Etheshaam enters the hospital room of Master Sabir wearing a sinister smile on her face. A flashback tells that she shares a history with Master Sabir and he knows some of her deadliest secrets and that he is also reminding her that he has her weakness. In the present scene, Master Sabir gets scared to see her and she with her sinister’s smile asks him Asma’s hand for Abhaan and on his refusal she removes the oxygen masks from his face, killing Master Sahab!

tweet
Share on FacebookShare on TwitterShare on PinterestShare on Reddit
Rameeza NasimJuly 29, 2021
the authorRameeza Nasim
Rameeza Nasim, a Paralian, poet, passionate about poetry, drama and fiction. By giving drama critiques I feel like I am endorsing the writer's message to the audiences and also stressing on what Writers trying to say through his character portrayals and story, I love my job. Being a critic responsibility lies on my shoulders to point out the flaws and shortcomings of the play be it on writer's , performers or director's end . I did my Masters in English Literature and Linguistics and I earn my living through writing.
All posts byRameeza Nasim