Asma and Rohaan are nikkahfied! 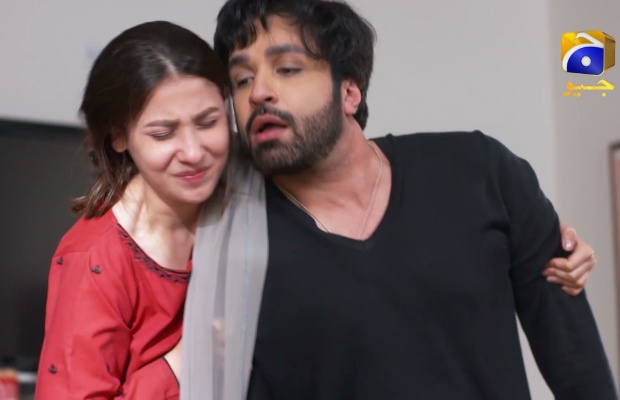 Dour the 7th Sky Productions is an intriguing watch with Azfar Ali Rehman’s brilliant performance. Apart from Sania Saeed and Azfar Ali Rehman’s phenomenal performances, Hina Altaf has also done a commendable job. In the previous episodes, we have seen that Mrs. Etheshaam is conspiring against Asma and Abhaan marriage but then in the latest episodes, we find that Mrs. Etheshaam has left with no choice but to let Rohaan and Asma’s nikkah happen.

Yasmin’s girls spill the beans in front of Asma that she is getting married to Abhaan, not Rohaan. Asma walks out of the house and Mrs. Etheshaam handles the situation carefully she puts the whole blame on Choti Phupho. It is so satisfying to see Choti Phupho getting insulted like that well Mrs. Etheshaam’s turn and this whole scene seems quite a stretch and then Asma getting agreed for her Nikkah is not making any sense. Asma and Rohaan are nikkahfied.

Well it is Mrs. Etheshaam’s game, she asks Abhaan to back off and then he just poses that he was jesting with Rohaan, Rohaan is clearly not happy with this but why he is not taking any stand instead he keeps bearing everything patiently. Abhaan after the nikkah calls his mother to his room and demands that he wants Asma at her room at any cost. Well, it seems that Abhaan and Mrs. Etheshaam has something really sinister going in their heads.

Mrs. Etheshaam creates a drama that her condition gets worse and poor Rohaan has left with no choice to take her mother to the hospital and leave Asma as an attendant at Abhaan’s room. Asma and Rohaan’s wedding night is spoiled. We have seen that Mrs. Etheshaam keeps repeating this drama again and again and it seems so tedious. The character Aadil (Haris Waheed) is like a breath of fresh air but Choti Phupho’s toxicity ruins his scenes too. He seems interested in Yasmin but Phupho is strictly against this idea.

Asma being a newlywed girl, who belongs from a lower-class background has such a level of confidence that she straight away fires Poro Chishti from work on the very first day. Well, she does not actually fire her but it seems that she has made to fire her. Poor Asma must have to regret the moment she fires Poro because Abhaan is making her extremely uncomfortable and she and Rohaan hardly get any time for each other. Poor Rohaan hires people and Mrs. Etheshaam keeps firing them, she wants Asma to take care of Abhaan. Will Asma be able to save herself from Mrs. Etheshaam’s sinister scheming?

tweet
Share on FacebookShare on TwitterShare on PinterestShare on Reddit
Rameeza NasimAugust 20, 2021
the authorRameeza Nasim
Rameeza Nasim, a Paralian, passionate about poetry, drama and fiction. By giving drama critiques I feel like I am endorsing the writer's message to the audiences, I love my job. Being a critic responsibility lies on my shoulders to point out the flaws and shortcomings of the play be it on writer's , performers or director's end . I did my Masters in English Literature and Linguistics .
All posts byRameeza Nasim