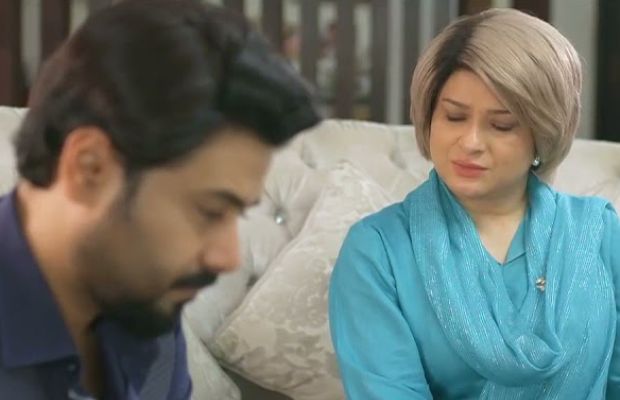 Dour the 7th Sky Entertainment production has turned more and more tedious although the intriguing value is still there. But we are tired of watching Choti Phupho’s annoying conversations and her conspiring with Mrs. Etheshaam. In the previous episode, we have seen that Romaan is doubting Asma and in this episode, it is shown that differences are growing between Romaan and Asma.

Romaan has turned out to be a huge disappointment, he has been portrayed as such a pathetic hero who has no brain of his own nor he has any manners. If he does not like Adil coming to his house he should have at least have a conversation about it with his wife even when she asks for it but no Romaan just has to doubt his wife.

Abhaan is making Asma’s life hell but Asma is not allowed to even share about it with Romaan, She is planning to share it with Romaan but then Mrs. Etheshaam creates a huge drama she even pretends to kill Abhaan, poor Asma has no choice but to stay quiet. Mrs. Etheshaam is on a mission to waste her pregnancy for that she keeps making her drink juices but still, Asma is not aware of her pregnancy.

It is shown that differences have been increased between Asma and Romaan. Romaan creates quite a hue and cries over Miss Mary telling Asma that she should do something. Asma has not uttered a word but still, Romaan is blaming her like a loser. He has no heroic attributes. When Asma tries to defend herself he says that he can go to her house very rudely and he leaves her too at Adil’s house without even trying to reduce their differences. There Mrs. Etheshaam once again parties with Choti Phuopho and starts conspiring with her against Asma.

Asma’s condition gets worse Adil and Yasmin take her to the nearby hospital and there the doctor suggests a few tests which they conduct. Choti Phupho gives the receipts to Mrs. Ethesham she procures the reports and it seems that she has a change of mind, she tells Romaan and Asma that Asma is expecting a child. Romaan is such a weirdo that he is not even happy about hearing Asma’s pregnancy but then Mrs. Etheshaam convinces him to say sorry and drop Asma and Yasmin. Asma is also not taking any step towards reducing the differences between her and Romaan but why would she? she has self-respect too.

tweet
Share on FacebookShare on TwitterShare on PinterestShare on Reddit
Rameeza NasimSeptember 16, 2021
the authorRameeza Nasim
Rameeza Nasim, a Paralian, passionate about poetry, drama and fiction. By giving drama critiques I feel like I am endorsing the writer's message to the audiences, I love my job. Being a critic responsibility lies on my shoulders to point out the flaws and shortcomings of the play be it on writer's , performers or director's end . I did my Masters in English Literature and Linguistics .
All posts byRameeza Nasim