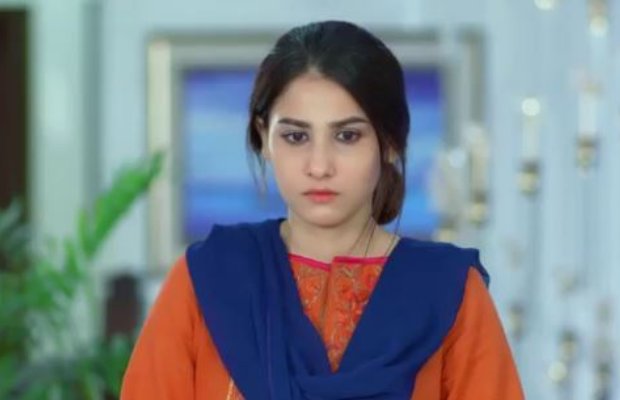 Dour the drama serial airing at Geo Entertainment is getting more tedious, the intriguing value attached with this play seems to have diminished. In the previous episode, it is shown that how Mrs. Etheshaam breaks the news of Asma’s pregnancy. In this episode, she is making a story that the child will not be normal so she is convincing Romaan for an abortion.

Mrs. Etheshaam is playing her cards so well she insists Romaan to bring back Asma and then she poses as if she is super happy and she is celebrating her pregnancy news. She is showering Asma and Romaan with gifts. Well apparently there is a sinister game going in her head too. Asma and Romaan are very happy but their happiness is timely.

Mrs. Ethehshaam herself is a little nervous she is fearing that if Asma gets to know about her pregnancy and the dosage that Mrs. Etheshaam is giving her through the test reports but luckily for her Asma is not aware of any such thing. Mrs. Etheshaam fabricates another story that Doctor has told her that Romaan and Asma’s child is not going to be normal. It is a huge setback and shock for both of them. Abhaan is too brutal that he is taunting Asma that his ill wish for her has eventually come true.

Mrs. Etheshaam is convincing Romaan to abort the child in her way, Asma is not present there, she is in Abhaan’s room. Romaan is too upset and disturb, Mrs. Etheshaam is explaining to him that how difficult it is for her to look after Abhaan when he is not abnormal by birth and there is still hopes for him so what he will do with a child who has no hopes for improvement. Romaan is almost convinced of abortion when they get interrupted by the sudden arrival of Adil.

Adil is extremely disturbed, he breaks the news of Yasmin’s sudden disappearance. He tells how she has left the house with girls in the middle of the night. Well, it is such an idiotic step by Yasmin that she not only has put herself in such a vulnerable position but she also put her daughters’ life in danger. That scene where she takes her to the graveyard is such a stupid scene and moreover, she is such a nincompoop that she leaves her daughters alone in the middle of the night at the grave and herself goes to a shrine! Absurd and idiotic! Asma tells Adil that whenever she is sad she goes to their father’s grave, hopefully, he will get her.

tweet
Share on FacebookShare on TwitterShare on PinterestShare on Reddit
Rameeza NasimSeptember 23, 2021
the authorRameeza Nasim
Rameeza Nasim, a Paralian, passionate about poetry, drama and fiction. By giving drama critiques I feel like I am endorsing the writer's message to the audiences, I love my job. Being a critic responsibility lies on my shoulders to point out the flaws and shortcomings of the play be it on writer's , performers or director's end . I did my Masters in English Literature and Linguistics .
All posts byRameeza Nasim