Dour Episode 24 & 25 Review: Yasmin pays for her blunder she has lost her younger daughter 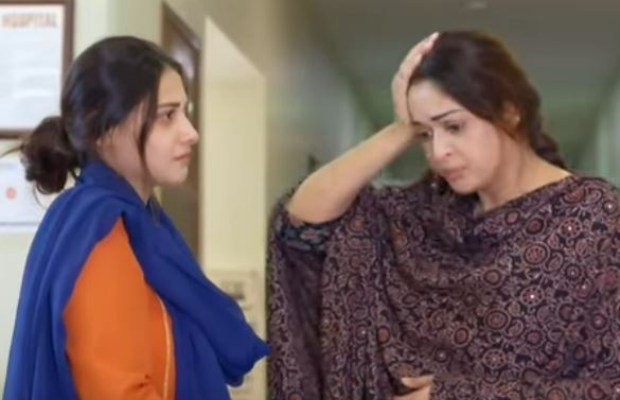 Dour the 7th Sky Entertainment production at Geo Entertainment has turned more and more tragic. It seems that poor Asma and Yasmin’s trials and troubles are never-ending. In the previous episode, we have seen that Yasmin makes a blunder of sneaking out of the house with her girls in the middle of the night. In this episode, Yasmin pays for her blunder she lost her younger daughter Guriya.

Yasmin and her daughters are found unconscious at her father’s grave. They have had poisonous food well it all seems so absurd why would anyone in the middle of the night at the graveyard give them food that is poisonous? Adil comes to rescue them but he cannot handle three of them alone it is Asma and Romaan who help them in taking them to the hospital.

Well, the heartbreaking thing is that Guriya dies at the spot while Yasmin and her eldest daughter survive. Asma is mourning her niece’s death and Adil is consoling her when Romaan loses his cool and starts blaming them for being too close and then Asma tells him to divorce her. This is such a big thing but then it is shown to be taken so casually that in the next scene they are behaving that as if nothing happens.

Abhaan has undergone a soul-shattering experience and he truly deserves it. Abhaan used to harass not just Asma but every other maid or nurse who takes care of her. The way Gaitee gives him a reality check is so daring and amazing! Gaitee has slammed him, slaps him throws water on his face, she tells him his worth, and tells him that she is not going to accept this kind of abuse from him ever. She works but she needs respect too. Abhaan seems to be moved after this eye-opening experience he just wants to die.

Romaan is helping Asma and Yasmin at every step, he even pays off 5 lacs to shut up Shoukat’s mouth so that they can peacefully have Guriya’s funeral. Adil has abandoned his mother and now Choti Phupho is tasting her own medicine, she is really guilty over her behavior. Yasmin is crying for her daughter the way she is mourning her death is so heart-wrenching but if honestly speaking Yasmin herself is the culprit she is the one because of whom Guriya is dead. Had she not left Adil’s house in the middle of the night Guriya would have not died.

We are going to miss that cute little child star performance as Guriya we have seen this child star last time in the drama serial Dunk.

tweet
Share on FacebookShare on TwitterShare on PinterestShare on Reddit
Rameeza NasimSeptember 30, 2021
the authorRameeza Nasim
Rameeza Nasim, a Paralian, passionate about poetry, drama and fiction. By giving drama critiques I feel like I am endorsing the writer's message to the audiences, I love my job. Being a critic responsibility lies on my shoulders to point out the flaws and shortcomings of the play be it on writer's , performers or director's end . I did my Masters in English Literature and Linguistics .
All posts byRameeza Nasim