Yasmin is working as Abaan's governess 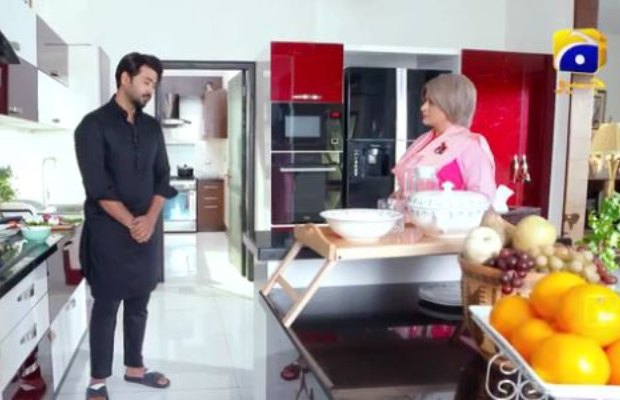 Dour the drama serial airing at Geo Entertainment is getting more and more intense. The previous episodes were quite depressing where Yasmin lost her daughter Guriya and we have seen that her burial is done at Romaan’s place. In these episodes, Yasmin is hired as Abaan’s governess and also Romaan takes a very brave decision of not aborting their child.

Yasmin is facing her grieve very bravely well it is strange that she is not blaming herself for Guriya’s death when in reality she is responsible for her untimely death. Yasmin shares with Asma and her family that she is going to look for a job, on which Mrs. Etheshaam offers her to work for her as Abhaan’s governess which she agrees for.

Asma tries her best to make Yasmin change her mind, she even tries to tell her that it is extremely difficult to look after Abhaan but she says that she is ready to accept this hardship. Surprisingly Abhaan is being really nice to Yasmin despite the fact that he does not want her there but still, he behaves strangely well with her, unlike his other maids. Yasmin is also very grateful to him for being too kind to her.

Romaan wants Asma to go for the abortion option, despite Asma’s reluctance Romaan is persistent that it is the right decision for their child. Romaan gives her the example of Abhaan that how bad he feels all the time, similarly their child will go through the same fate if they let him live, he not only lives his life miserably but he will also make their lives miserable. He is afraid of his child’s future and who will take care of him when they will die? Poor Asma has been left with no choice but to agree to an abortion.

Romaan is all set to take Asma to the Doctor but then an incident changes his whole perception about the coming child. A man visits him with his special child and he is being extremely grateful to him for giving him the right advice at the right time that not to go with abortion and now his child who is special but he is his absolute pride. He tells him that his son gives him confidence and happiness that no one has ever given him. Romaan gets inspired by this incident so much so that he has changed his mind not to go for the abortion option. He is ready to take his child and he tells his decision to everyone, Mrs. Etheshaam has no option but to agree.

tweet
Share on FacebookShare on TwitterShare on PinterestShare on Reddit
Rameeza NasimOctober 7, 2021
the authorRameeza Nasim
Rameeza Nasim, a Paralian, passionate about poetry, drama and fiction. By giving drama critiques I feel like I am endorsing the writer's message to the audiences, I love my job. Being a critic responsibility lies on my shoulders to point out the flaws and shortcomings of the play be it on writer's , performers or director's end . I did my Masters in English Literature and Linguistics .
All posts byRameeza Nasim