Romaan trashes Asma by accusing her having an affair with Adil 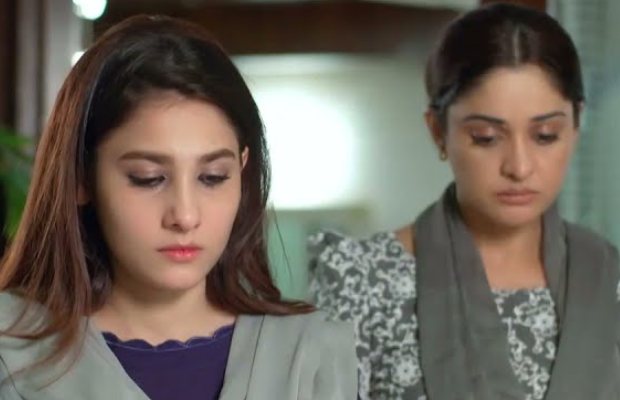 Dour the 7th Sky Entertainment production at Geo Entertainment has aired its episodes 28 and 29. The story has become tedious there are many repetitions that are dragging the plot. In the previous episode, it was shown that Romaan takes a brave decision of not aborting their child and in this episode, they come to know that their child is completely normal.

Well, there is a repetitive pattern in Abhaan’s case. He used to harass his attendants but he is being nice to Yasmin. However, he shows his true colors to her as well by demanding her to make him lie on the bed which is nearly impossible for a girl like her he is heavy but she is trying to follow his orders when Asma sees her and she intervenes, she stops Yasmin and Abhaan falls. Abhaan makes a lot of hue and cry. Romaan gets angry with Asma.

Yasmin is insisting Asma apologize to all. Mrs. Etheshaam too does a drama of apologizing and begging Asma never to leave Romaan like that. Asma tries to say sorry to Romaan but he is in no mood to accept her apology in fact he starts trashing her and also he stoops so low that he starts accusing her of having an affair with Adil. This is the limit for Asma she has made her mind that she is going to leave the house.

Asma is about to leave the house when Adil and his mother come for Yasmin’s proposal. Yasmin should have seen that how Adil loves her daughter and how she is attached to him but no she makes another blunder. She rudely declines this proposal by making weird conditions like she will have no children with Adil, Adil is still okay with these conditions but his mother is not.Romaan is really ashamed of his attitude, he thinks that he does not truly deserve Asma and he is kind of right. Well, Asma forgives Romaan for her child.

tweet
Share on FacebookShare on TwitterShare on PinterestShare on Reddit
Rameeza NasimOctober 14, 2021
the authorRameeza Nasim
Rameeza Nasim, a Paralian, passionate about poetry, drama and fiction. By giving drama critiques I feel like I am endorsing the writer's message to the audiences, I love my job. Being a critic responsibility lies on my shoulders to point out the flaws and shortcomings of the play be it on writer's , performers or director's end . I did my Masters in English Literature and Linguistics .
All posts byRameeza Nasim