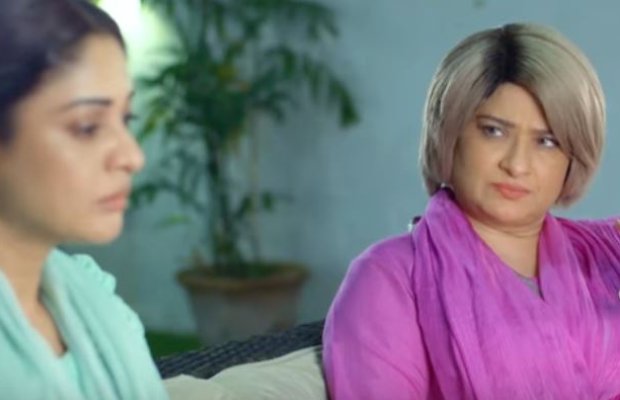 Dour the 7th Sky Entertainment’s production at Geo Entertainment is down with two more episodes, while the story seems to have become quite tedious. The intriguing value in the play has quite diminished but we still want to know the background story of Mrs. Etheshaam. In the previous episode, we have seen that Yasmin rejects Adil’s proposal by putting weird conditions. In the latest episode, it is shown that Mrs. Etheshaam wants Yasmin to marry Abhaan.

Yasmin is really crossed about Adil’s proposal she is getting unreasonably mad at her daughter Hania. Poor girl only wants her mother to marry Adil. Mrs. Etheshaam all of sudden asks Hania to accompany her shopping as she wants to buy some toys and stationery. Then we see that all of sudden out of nowhere Sikandar appears demanding to give her daughter back. Surprisingly Hania agrees that she is the one who has called her father.

Hania is crying at her father’s place and she is recalling how Mrs. Etheshaam has brainwashed her and suggests she goes back to her father. Hania is really a nincompoop to follow Mrs. Ethesham’s stupid advice. She is now at the mercy of her father who is least bothered to keep her, he is just keeping her so that he can cash her.

It is actually Mrs. Estheshaam who is cunningly orchestrating all this misery, she wants to make Yasmin even more miserable so that she can take advantage of her helplessness. Mrs. Etheshaam offers to help Yasmin in Hania’s case and moreover, she is offering her financial help but in return she wants her to marry Abhaan. Yasmin is speechless on hearing this demand of Mrs. Etheshaam she has not yet given her reply. Things between Asma and Romaan have been settled and they are once again a happy couple. Romaan really wants Adil to marry Romaan.

Yasmin is really disturbed about this proposal but she has not shared anything with Asma despite her asking. Abhaan has made a lot of hues and cries over not marrying Yasmin, he is looking down at her calling her a low-level woman. Yasmin overhears Mrs. Etheshaam and Abhaan’s conversation where she is trying to convince Abhaan by telling him that a helpless girl like Yasmin is what he wants in his life, he needs a permanent caretaker and no one except Yasmin can take good care of him as they can always take advantage of her helplessness and miseries. After hearing all this nonsense if still Yasmin agrees to marry Abhaan she is the biggest nincompoop.

tweet
Share on FacebookShare on TwitterShare on PinterestShare on Reddit
Rameeza NasimOctober 22, 2021
the authorRameeza Nasim
Rameeza Nasim, a Paralian, passionate about poetry, drama and fiction. By giving drama critiques I feel like I am endorsing the writer's message to the audiences, I love my job. Being a critic responsibility lies on my shoulders to point out the flaws and shortcomings of the play be it on writer's , performers or director's end . I did my Masters in English Literature and Linguistics .
All posts byRameeza Nasim