The end is giving a strong message of forgiveness 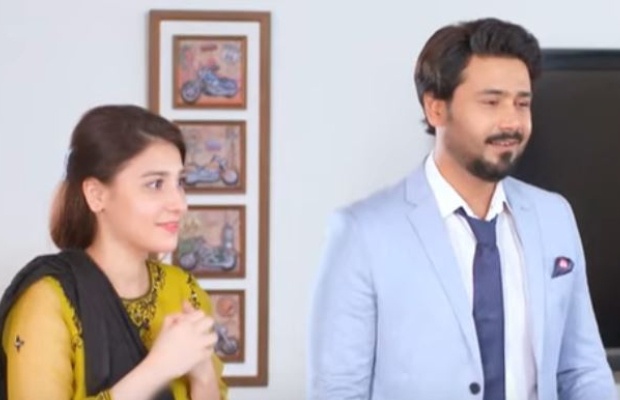 Dour the 7th Sky Entertainment drama serial finally comes to an end.The play ended on a positive note, it is conveying a strong message of forgiveness. Poetic Justice is served in case of Mrs Etheshaam but it was divine justice, Romaan has not punished her. Finally, Yasmin and Adil’s union is shown. Asma too comes back to Romaan and they both forgive Abaan.

Asma and Yasmin’s puppet shows are becoming huge hits with full house shows, both the sisters are successful in reviving the legacy of their late father Sabir. It is shown that Adil and his mother also go to watch the show, in fact, Adil is there at every step to support Yasmin. Romaan is also present in the audience but he watches at a distance.

Adil’s mother tells Yasmin that Adil is planning to move abroad but his heart is not in that plan if she really cares for him she could stop him from going. Then we see a cute scene of Yasmin wearing Sari where she actually proposes to Adil, their scenes are cute and they both make a really cute couple. Thereafter married life is also shown when they both are having a romantic tea session on the balcony, they both are having tea from a single mug.

Romaan is really sad and lonely he goes after Asma but she says that she will never come back. Asma is resolute but then that Pakhtoon Baba convinces Asma not to leave Romaan alone. Romaan through that lawyer comes to know the actual truth about his life how Mrs. Etheshaam killed his parents and then she with the help of that lawyer has captured all Romaan’s wealth and property. To our surprise, Romaan’s reaction is quite different from what we were expecting from him. He tells Mrs Etheshaam that along with his real parents she has also killed his mama (referring to Mrs. Etheshaam) then he tightly hugs her, kisses on her forehead, and says that he is dead for her.

Mrs Etheshaam could not stand this guilt any more, Romaan has made her feel so guilty that the guilt takes her life. Romaan and Asma forgive Abaan and they move back to their house. Asma and Yasmin continue their jobs. Romaan and Asma are working hard to take care of Romaan and they are trying to make him stand on his feet once again. Well, the ending very beautifully portrays the message of forgiveness. Letting go and forgiving is the indeed best revenge.

tweet
Share on FacebookShare on TwitterShare on PinterestShare on Reddit
Rameeza NasimNovember 24, 2021
the authorRameeza Nasim
Rameeza Nasim, a Paralian, passionate about poetry, drama and fiction. By giving drama critiques I feel like I am endorsing the writer's message to the audiences, I love my job. Being a critic responsibility lies on my shoulders to point out the flaws and shortcomings of the play be it on writer's , performers or director's end . I did my Masters in English Literature and Linguistics .
All posts byRameeza Nasim