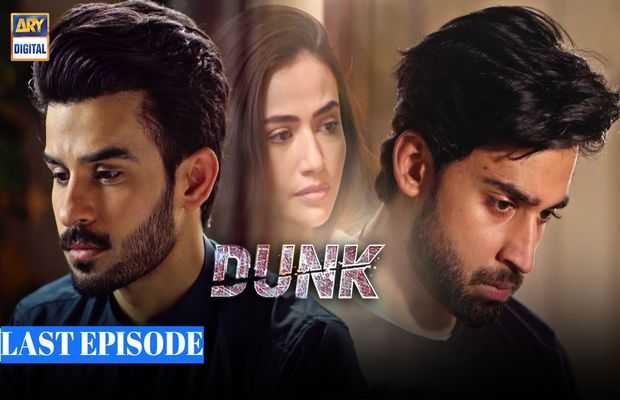 Dunk, the ARY Digital drama serial based on false accusations of sexual harassment concluded in a double episode finale. Well, it could be conveniently wrapped into a single episode if we exclude few dragging scenes and a bit of over-dramatization. Amal is sentenced to 10 years of prison for wrongly accusing Haider and Professor Humayun. Besides this penalty, Kamra has also hit Amal hard!

The episode opens with a scene where Amal confesses in front of Haider that she is going to withdraw her case and she will back off and begs him to let her go. Haider’s friend is taking all the footage of Amal’s whole confession. Thank God Haider is only mentally torturing her, he then leaves her in fact he himself drops her at her place.

Amal’s father who is still supporting Amal despite hearing all the pieces of evidence in court, confronts Haider on which Haider very convincingly tells him that he has never done anything bad to Amal ever, it is Amal who is lying and then he shows his uncle the video footage in which Amal is boldly confessing that she has lied about Professor Humayun just because he refuses her request and also she accuses Haider because he dared to refuse to marry her. She is further mentioning that she has even used her parents as a tool.

Amal’s father lost his belief in his daughter, he is simply broken. He cannot face even his own brother and his family because of Amal. He commits suicide just like professor Humayun, like him he cannot face the world. Well, his death scenes and Amal’s mother appearing in the court seems a little over-dramatized. Amal is sentenced to 10 years in prison along with 3 lacks penalties well besides that it seems that Amal has also tasted her own medicine. Karma has bitten her quite hard just like Professor Humayyun’s daughter has lost her father, she has also lost her father.

The ending scene is heartbreaking where Saira goes to Professor Humayun’s grave, her husband has cleared off from all charges and Haider has made sure that he publishes the court statement on all the social media sites but all this could not bring Professor Humayun back. Ghana has lost her father and Saira has lost her husband for her whole life. A person has left with no choice but to take his own life just because someone has wrongly accused him just to satisfy her false ego. A sorry state of affairs!

tweet
Share on FacebookShare on TwitterShare on PinterestShare on Reddit
Rameeza NasimAugust 8, 2021
the authorRameeza Nasim
Rameeza Nasim, a Paralian, passionate about poetry, drama and fiction. By giving drama critiques I feel like I am endorsing the writer's message to the audiences, I love my job. Being a critic responsibility lies on my shoulders to point out the flaws and shortcomings of the play be it on writer's , performers or director's end . I did my Masters in English Literature and Linguistics .
All posts byRameeza Nasim