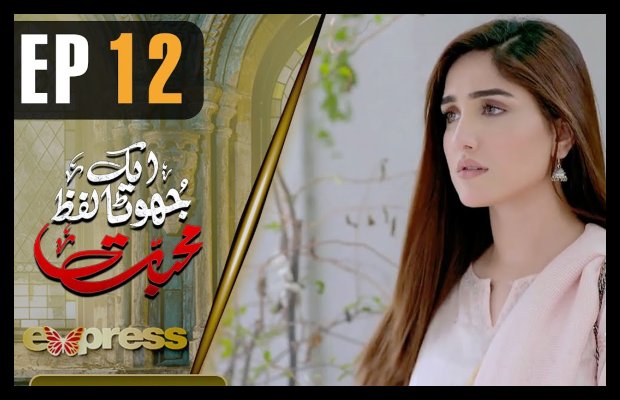 Ek Jhoota Lafz Mohabbat the drama serial on Express TV has turned toxic as it has added the track of the most toxic theme of sister rivalry. In the previous episode, we have seen that Phupho wants Areesha to marry Maaz as she thinks of her as their lucky charm. In this episode, it is shown that Areesha is now eyeing her sister’s husband Maaz.

The episode begins on a beautiful note where Maaz is giving Aleeza a beautiful chain he bought from that Jewellery shop as her birthday gift he also puts that chain on her neck himself. Maaz is portrayed as a thorough gentleman who cares about his wife too. It is shown that Areesha gets a little disturbed to see that gift her sister gets and she compares it with her own which seems to be less expensive to her.

Well, it is shown that Maaz gets a furnished new bungalow from his office. It looks so unrealistic how come Maaz gets so much changed almost change of status within such a short period of time. He is made the head in his office and he is given a car and now a bungalow to be honest in a city like Karachi there are hardly any jobs which give accommodation as it is too expensive.

Areesha is regretting hard when she sees that Maaz has everything now which she has dreamed for but now it is too late. Phupho feels that Areesha’s presence is their lucky charm, she has brought with her luck and wealth. Phupho is so toxic that she tells Areesha that she still wants her to be her daughter in law on which Areesha creates a lot of drama that Maaz is now her sister’s husband and she does not want to break her sister’s house ever. In real Areesha is pretending all this just to win her phupho’s heart.

Areesha is so mean and vile that she herself is eyeing her brother-in-law, she has no shame in realizing the fact that it is her sister who has given her shelter in her house and she is after breaking her house. She knows that Maaz still has feelings for her and also that Maaz has not accepted Aleeza as his wife yet as she has seen him sleeping separately on the floor. Areesha is so cunning that she approached Saad and now she will try her best to break Aleeza and Maaz’s relationship as she herself wants to marry Maaz.

Sorry to say but the story has turned quite pathetic!

tweet
Share on FacebookShare on TwitterShare on PinterestShare on Reddit
Rameeza NasimOctober 27, 2021
the authorRameeza Nasim
Rameeza Nasim, a Paralian, passionate about poetry, drama and fiction. By giving drama critiques I feel like I am endorsing the writer's message to the audiences, I love my job. Being a critic responsibility lies on my shoulders to point out the flaws and shortcomings of the play be it on writer's , performers or director's end . I did my Masters in English Literature and Linguistics .
All posts byRameeza Nasim