Maaz hits Maria which leads to her miscarriage 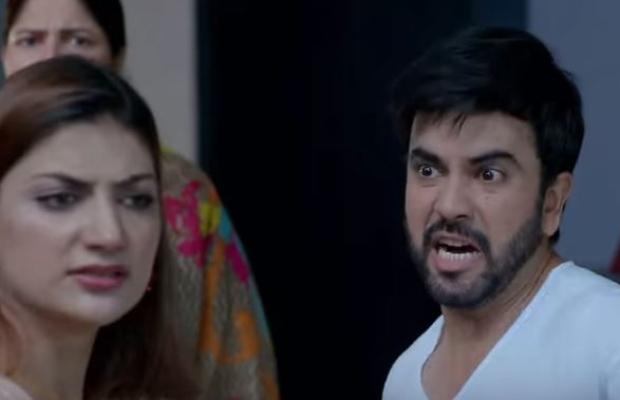 Ek Jhoota Lafz Mohabbat the drama serial airing at Express TV is getting more and more disturbing and depressing. Besides that ugly sister rivalry theme, the story has other loopholes too. In the previous episode, we have seen that Aleeza is living on her own at her father’s house. In this episode, Maaz turns out to be a huge disappointment he hits her pregnant sister so hard that it leads to her miscarriage.

The episode begins when two loafers are following Aleeza all the way to her home and one of them stops her way by holding her arm. Aleeza rewards that loafer with a tight slap on which that loafer says that he will take revenge for it. Those goons sneak into Aleeza’s house by unlocking the lock with keys well one wonders how come they get the keys.

Saad is, by the way, passing Aleeza’s house, he sees the open door he feels something fishy so he also enters into the house to save Aleeza jee. One of the neighbors sees Saad entering into the house he gathers other neighbors, in the meanwhile Saad has kicked the loafer thieves out of the house and he is alone there which makes his position even more suspicious.

Aleeza has herself seen with her eyes the two masked goons but when neighbors catch Saad alone there she is also behaving as if she is shocked to see him being so low. Saad’s explanation has not moved anyone not Aleeza nor the neighbors they have called the police and poor Saad is in lockup being punished for helping Aleeza. Maaz’s boss is not happy with his current performance he has given him a final warning that he will get fired if he will continue with his non-serious and inconsistent performance. Maaz shares with Areesha about his warning and she starts fearing that if he loses his job she will not going to stay with him.

Areesha is so vile and malicious that he deliberately plotted a scene to create a drama in the house which ends up Maria losing her pregnancy. Maaz turns out to be a huge disappointment apart from what he has done with Aleeza, he hits his pregnant sister just to defend that vile Areesha which leads to Maria’s miscarriage. Maaz is in deep remorse and he is rightly so as he is responsible for ruining his sister’s happiness. It seems that Maaz will dwell in this guilt for a while and will definitely going to lose his job and eventually Areesha will going to leave him too.