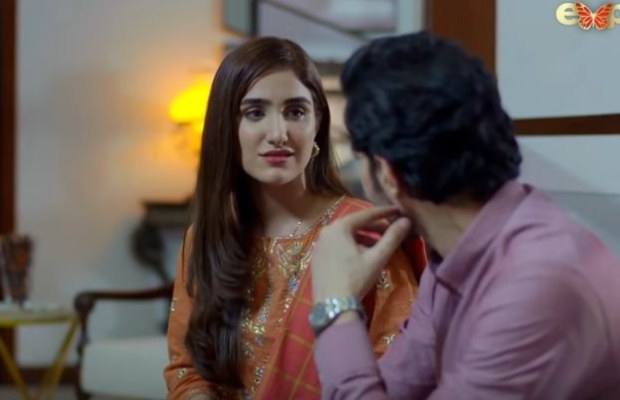 With 4 episodes down Ek Jhoota Lafz Mohabbat at Express Entertainment is getting intense starring Amna Ilyas, Junaid Khan, Aiza Awan. The drama having one of its main characters of a really problematic nature, yes Areesha is being so mean and she is quite a problematic character. In the previous episodes, we have seen Areesha being happy in her newly married life, and in this episode, we have seen that she is trying to brag about her newly attained status in front of Maaz and Aliza.

Poor Aliza is paying for the sins she has not even committed. Areesha is touching new heights of meanness she sends her selfies with her husband to Aliza with a caption “Mera Ameer Husband” which has made her even more shocked and sad, on top of that the scene has shocked the audience too when out of nowhere Aliza’s sister in law appears and she literally snatches her phone and starts creating a fuss over the pictures.

Well on top of that Aliza’s father also coincidentally makes his entry into the scene. Aliza’s mother and sister-in-law are accusing poor Aliza of being partners in crime with Areesha. According to them, she is backing her sister which is why she is sending her pictures. Aliza’s father also believes that and he starts blaming her own daughter! He is not realizing for the moment that it is she who is suffering the most.

Poor Aliza is crying hard on her fate when Maaz arrives. Surprisingly Maaz is being nice to her and he supports her by taking her side in front of her mother and sister. Well, one thing is not making any sense why Aliza sends Areesha’s pictures on Maaz’s phone doesn’t she know that it will eventually be going to break his heart? Why Aliza’s father is doubting her intentions is all making no sense at all! Maaz takes Aliza to her father’s place and eventually, she convinces her father that she has not done anything wrong.

Areesha is one problematic character, instead of being happy and grateful that she gets a good life partner she is trying to show off in front of Maaz and her sister that she got a rich husband. She keeps sending her selfies and pictures of her house to Aliza. She is shown as a greedy and jealous person who is offended to see her maid wearing the same dress she bought for 17 thousand rupees.

Moreover, she is trying to call Maaz which he ignores. Areesha is not happy with her husband she thinks of him as a boring person. The episode ends when Areesha who has learned driving, trashes poor Maaz with muddy water deliberately with her rash driving. Well, why she needs to be that mean she is a real heartless girl!