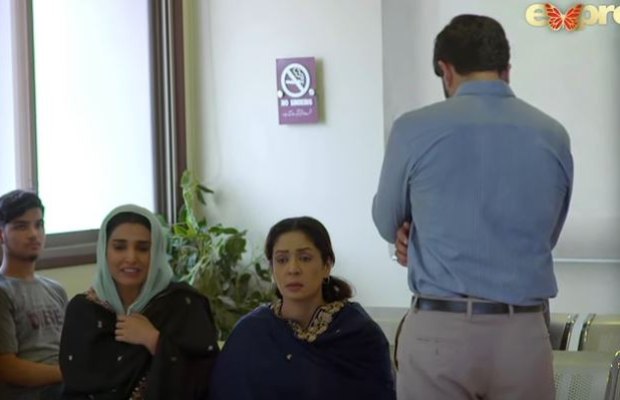 Express Tv’s drama serial Ek Jhoota Lafz Mohabbat is a play which is based on two sisters and it seems that the sister who has wronged everyone is living a happy life and the one who has sacrificed her happiness for her father’s honor is suffering badly. In the previous episode, we have seen that Aleeza’s suffering seems never-ending and in the latest episode, Aleeza and Areesha’s father dies.

Aleeza’s troubles seem never-ending on top of that Saad has created more problems for her now Maaz’s mother starts doubting Aleeza saying that she will leave Maaz the way Areesha did and she is further insulting her calling her names when her father appears. Maaz’s mother does not care even about her brother and badly hurts him, he takes all this insult to his heart.

It seems that Areesha’s husband has getting alarmed by seeing Areesha and his friend’s closeness. Areesha’s husband has a past that his own mother was having an affair with another man and he is now fearing that Areesha might repeat the same mistake. It seems that his friend’s presence is going to create differences between Areesha and him. Maaz very nicely brushes off Aleeza’s fears by telling her that he is never going to leave her and also that she is not responsible for having issues in his job, it is only because of his own concentration issues due to his personal matters.

Aleeza tells Maaz that his father has left the house in a very hurting way and she is afraid for his condition. Maaz’s mother tries to intervene but Maaz stops him telling her why she is now not concerned about her brother’s health? Despite her opposition, he takes Aleeza to her house where they see her father in a very deteriorating condition. They both take him to the hospital but they could not save him. Poor Aleeza lost her father, she calls Areesha and Areesha also seems quite disturbed. Areesha has not asked forgiveness from her father.

tweet
Share on FacebookShare on TwitterShare on PinterestShare on Reddit
Rameeza NasimSeptember 22, 2021
the authorRameeza Nasim
Rameeza Nasim, a Paralian, passionate about poetry, drama and fiction. By giving drama critiques I feel like I am endorsing the writer's message to the audiences, I love my job. Being a critic responsibility lies on my shoulders to point out the flaws and shortcomings of the play be it on writer's , performers or director's end . I did my Masters in English Literature and Linguistics .
All posts byRameeza Nasim