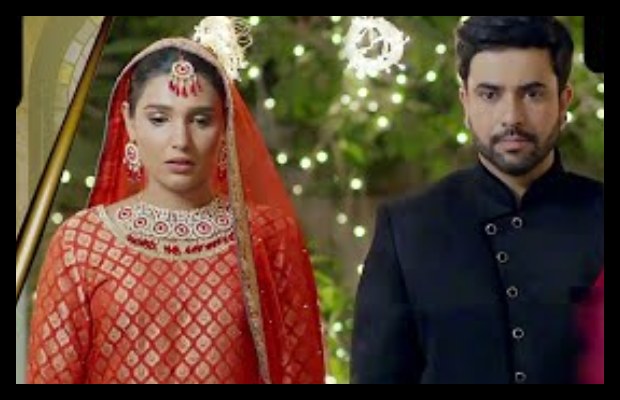 Ek Jhoota Lafz Mohabbat is three episodes down at Express TV. This episode is all about crying as everyone is broken except Areesha In the previous episode, we have seen that Areesha elopes at her wedding night leaving behind a message. She marries somewhere else and poor Aliza has no choice but to pay for her sister’s sins. . Most of the characters have shown crying in this episode.

Why it is believed that if Aliza marries Maaz then it will cover up the disgrace Areesha’s elopement has brought to her family. What is the logic behind that why Aliza’s father pleading her that “meri izzat raakh lo” why her marrying with Maaz will undo what Areesha has done and what is the link and connection of Aliza marrying Maaz is not making any sense at all. Anyways Aliza agrees to marry Maaz.

Poor Aliza is paying for the sins she has not even committed, for all her life she has to pay for what Areesha has done to Maaz and his family. Maaz and his mother leave the newly wedded bride at the door of the house. Maaz’s mother literally hates Aliza for no reason and Maaz is too busy mourning over his ruined happiness and over his own humiliation.

There were elaborated crying scenes, Maaz is crying hard, poor Aliza cries the whole night. Aliza’s parents are crying only Areesha is the happy person who is busy marrying a stranger she met only a few days ago. Well, it is such torture to see the good ones crying badly and the only mean character being happy after ruining so many lives. Why Aliza’s father has agreed to marry off Aliza to Maaz when he clearly knows that his sister does not like Aliza at all. Why did he let poor Aliza suffer?

We have not seen any conversation between Maaz and Aliza. Maaz does not even bother to take Aliza’s side when her mother insults her, this is so bad and it seems like Maaz deserves whatever Areesha has done with him. Well, it seems that life is not going to be a bed of roses for Areesha as well as his rich newlywed husband taunts her on the very next day of her wedding about her class. It seems that he does not truly respect her. The episode ended when Saad calls Maaz, he is congratulating him on his supposed wedding little he knows that Maaz has married Aliza instead of Areesha, another heartbroken person.