Basit's mother gets into critical condition 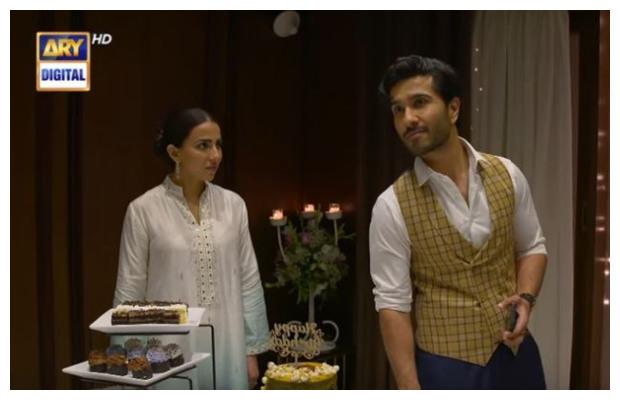 Habs Episode-15 Review – Digital’s drama serial Habs is of the best in the running. Carrying nuances, well-crafted characters and well-proportioned performances is what makes this serial our favorite Prime Time Watch. In the previous episode, we have seen that Ayesha is fed up with her empty relationship with Basit. In this episode, it is shown that Basit cruelly breaks his mother’s heart.

Ayesha is already fed up with their empty relationship and she is also disturbed by the fact that Basit actually intended to slap her although he has stopped himself it was his intention to slap her even though it was due to his fit of anger. Basit has bit stooped from the level of a hero.

Basit’s mother tells Ayesha that Basit really missed her when she was not home. She says that he was desperately asking Karim about her. Ayesha is not moved by this she knows that Basit is quite hopeless. Ayesha moved when Basit’s mother tells her that she sees her as her daughter, she says that she has no daughter but she considers Ayesha as her daughter and she once again takes promises to her never to leave Basit. She also suggests Ayesha to celebrate Basit’s upcoming birthday.

Zoya has gotten mad at Basit for schooling Amir and his parents on demanding dowry. Zoya is still desperate for Amir but her mother is now not ready to marry off Zoya to Amir. She has arranged a proposal for her and they have said agreed for Zoya. Bano has joined Basit’s office and it seems that she will too become a victim of office politics as that same office colleague who used to scandalize Ayesha is seated next to Bano’s cabin. Bano’s mother is so greedy that the first thing she asked Bano when she returns from the office is about her salary.

Basit comes home with a surprise Birthday Bash. He immediately understood that it is his mother’s idea. Basit once again falls from grace by insulting her mother in front of all his friends well no friend of his tried to stop him from misbehaving with her mother. Basit’s mother takes this insult to her heart and she falls unconscious. Ayesha and Fahad take her to the hospital. Basit is not picking up the call he does not know that his mother is in a critical condition. Ayesha lies in front of her that Basit pays a visit to her and he is worried about her. Well, when Fahad finally tells Basit about his mother’s condition he gives quite an absurd reaction. Basit is not a nice person he is not being kind to his mother nor he is fulfilling his wife’s rights. However, we still root for Basit and Ayesha’s relationship.

tweet
Share on FacebookShare on TwitterShare on PinterestShare on Reddit
Rameeza NasimAugust 23, 2022
the authorRameeza Nasim
Rameeza Nasim, a Paralian, passionate about poetry, drama and fiction. By giving drama critiques I feel like I am endorsing the writer's message to the audiences, I love my job. Being a critic responsibility lies on my shoulders to point out the flaws and shortcomings of the play be it on writer's , performers or director's end . I did my Masters in English Literature and Linguistics .
All posts byRameeza Nasim