Aswad claims Mehreen as his fiance in front of Sufwaan's family 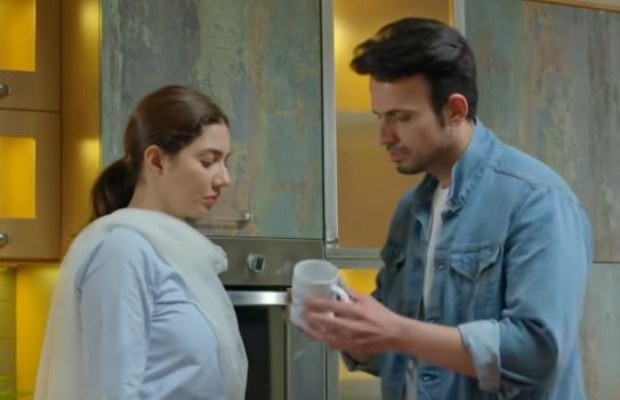 Hum Kahan Kay Sachay Thay with all its merit, brilliant direction and incredible performances is still a toxic play when it comes to the narrative of the story. Mehreen’s whole family except her khala and mother seems psycho. In the previous episode, we have seen that Aswad is not believing Mehreen and in this episode, Aswad goes a step ahead he is planning to punish Mehreen.

Aswad ‘s suspicions on Mehreen increases when he meets Mashal’s father and Shabo. This suicide thing is so cleverly executed that we also at times get a feeling that Mehreen might have killed Mashal. Shabo narrates that she has seen Mehreen making tea for Mashal and also she was stirring something in the tea when she says that she does not take sugar in tea , Mehreen says that” Mere haath say pee laygee”.

Aswad does not stop here, he goes to the police station for further investigation. There he meets that annoying Inspector who tells him that all evidences and proofs are against Mehreen. He shows him mugs too and tell him that one has sleeping pills while other has not. He further says that sometime a person who has all the evidences against her is still innocent .

Mehreen’s khala contacts Safwaan and tells him to bring his proposal for Mehreen. Safwaan is more than happy to know that but before that he wants to confirm this from Mehreen. He is fearing that after all such news and scandal his mother might not agree for her proposal but he is resolute that he will make her agree. Mehreen is reluctant to marry Safwaan, she does not want to make him a part of the mess she is in but with all the pressure around and Safwaan’s insisting Mehreen eventually agrees to marry Safwaan. Safwaan along with his mother brings his proposal for Mehreen.

Everyone having a pleasant conversation when all of sudden out of no where Aswad enters into the drawing-room with a blank face. Aswad’s mother introduces him with Safwaan and his mother and tells him that they have brought proposal for Mehreen on which Aswad very casually says that how can they bring a proposal for her fiance? Aswad claims Mehreen as his fiance in front of Safwaan and his mother so that he could punish Mehreen in his own way. It seems that now Aswad is planning to marry  Mehreen and then gradually punish her for killing Mashal? Will Mehreen fall as a prey for Aswad? will she refuse to marry poor Safwaan again? Safwaan do not deserves this all!

tweet
Share on FacebookShare on TwitterShare on PinterestShare on Reddit
Rameeza NasimOctober 18, 2021
the authorRameeza Nasim
Rameeza Nasim, a Paralian, passionate about poetry, drama and fiction. By giving drama critiques I feel like I am endorsing the writer's message to the audiences, I love my job. Being a critic responsibility lies on my shoulders to point out the flaws and shortcomings of the play be it on writer's , performers or director's end . I did my Masters in English Literature and Linguistics .
All posts byRameeza Nasim