Mehreen is getting hallucinations of Mashal 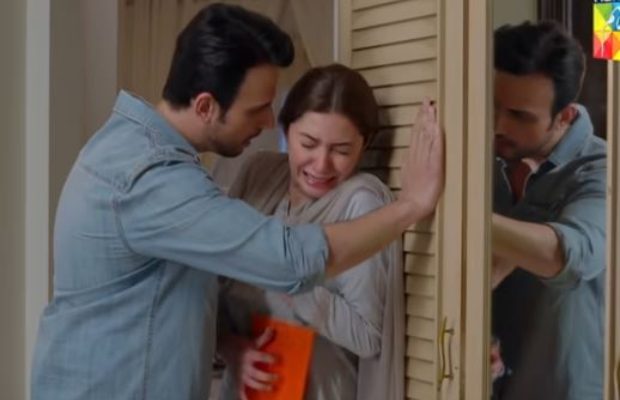 Hum TV’s drama serial Hum Kahan Kay Sachay Thay has now seems to enter into the course of its second half. The story getting more and more toxic and depressing. In the previous episode, we have seen that Mehreen is getting hallucinations in which she actually sees and talks with Mashal. In this episode, it is shown that Aswaad is back to make Mehreen’s life hell.

We have seen Mehreen getting a very intense hallucination in which she clearly sees and talks with Mashal as if she is really present and there she sees Aswaad too talking with Mashal the scene is so intense that Mehreen feels as if its real and then we see Aswaad too coming back home to make Mehreen’s life more disturbing.

Aswaad traveling to and from America seems so casual as if he is traveling to Hyderabad. We have seen that even Aswaad gets worried to see this distorted mental condition of Mehreen where she is claiming that she has met Mashal and him, but then we have seen that Mashal’s words echo into Aswaad’s head and he starts calling her a great actor. He is been so disrespectful to Mehreen now that he does not shy away to spit his venom against Mehreen in front of his mother too.

Aswaad is too rude to Mehreen that he tells his mother that he hates her with and without makeup he is saying this to her when she has dressed up in a very beautiful sari. We were seriously waiting for Shaboo to spill the beans and reveal the truth but there is no mention of Shaboo in this episode. Tahir Mashal’s father is now having doubts in his mind he asks Shughufta about Mashal taking sleeping pills, she changed the topic saying that his family is trying to blame her dead innocent daughter instead of replying to his question.

Aswaad meets his Mamoo and tells him that he is going to bring Mehreen so that he can do whatever harm he wants to do with her. Despite Aswaad’s mother’s disapproval Aswaad is forcing Mehreen to apologize but Mehreen tries to confront, here we have seen Aswaad stooping so low that he yells at her. We are so disappointed to see Mehreen getting weak and forcefully going with her to her Mamu’s place for an apology when she has committed no sin. When Mehreen goes there Shaghufta is ready to attack her, she curses her but when Mehreen begs for forgiveness Tahir abruptly says that he has forgiven her now what does it mean? Has he really meant that or he has just said those words to shoo her away?

tweet
Share on FacebookShare on TwitterShare on PinterestShare on Reddit
Rameeza NasimNovember 15, 2021
the authorRameeza Nasim
Rameeza Nasim, a Paralian, passionate about poetry, drama and fiction. By giving drama critiques I feel like I am endorsing the writer's message to the audiences, I love my job. Being a critic responsibility lies on my shoulders to point out the flaws and shortcomings of the play be it on writer's , performers or director's end . I did my Masters in English Literature and Linguistics .
All posts byRameeza Nasim