Mashal is resolute that she won't let Aswad marry Mehreen 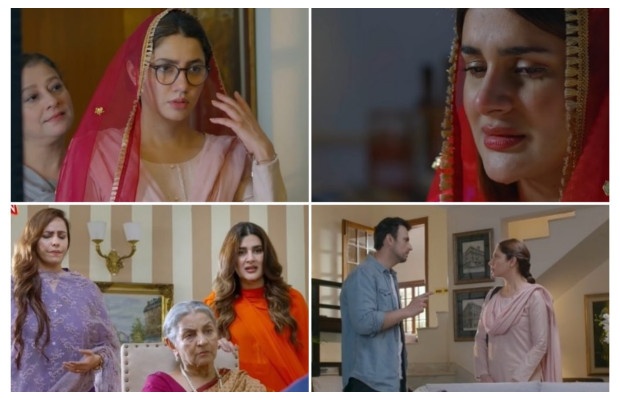 Hum Kahan Kay Sachay Thay is everyone’s favorite Hum TV Prime Time Watch. Despite having quite a toxic narrative and toxic characters it is still the powerful and incredible performances in the play which make this play strong. In the previous episode, we have seen that Mehreen agrees to marry Aswad in spite. In this episode, Mashal’s parents cut off their relationship with Aswad and Mehreen’s mothers.

Mashal’s parents create a great fuss over Mehreen and Aswad’s engagement. They call Suleha and insults her, moreover, they start blaming Aswad that he is flirting with Mashal all the time and it is he who leads her on. Poor Aswad’s mother is speechless, she is seeing the true ugly self of her brother and sister-in-law, she is resolute that she will not make Mashal her daughter-in-law no matter what happens.

Mashal’s parents have not stopped here, they call Rabia and start emotionally blackmailing her by saying that they have brought up their daughter and now it’s time for her to pay off. They have the audacity to demand Rabia to call off Mehreen and Aswad’s wedding as they want Aswad to marry Mashal. Rabia is speechless but then when she meets Suleha she tells her not to take their threats seriously. They have given notice to Mehreen to leave the house as soon as possible. Well, still Mehreen keeps her wedding dresses there in the room knowing that how vulnerable her room is as  Mashal barges into her room anytime.

Mashal goes to Aswad’s place to change his mind but Aswad is angry with her about her family attitude with his mother, he clearly tells her that her mother is not forcing her he is happily fulfilling his mother’s wish. He further says that there was no romance between her and him, it was just a social media friendship and liking. He truly apologizes for raising her hopes but Mashal clearly begs him not to marry Mehreen. Mashal does not love Aswad she only wants him because Mehreen loves him. Mehreen also knows that whatever Mashal is doing is out of pure jealousy and she is pitying her for that.

tweet
Share on FacebookShare on TwitterShare on PinterestShare on Reddit
Rameeza NasimSeptember 20, 2021
the authorRameeza Nasim
Rameeza Nasim, a Paralian, passionate about poetry, drama and fiction. By giving drama critiques I feel like I am endorsing the writer's message to the audiences, I love my job. Being a critic responsibility lies on my shoulders to point out the flaws and shortcomings of the play be it on writer's , performers or director's end . I did my Masters in English Literature and Linguistics .
All posts byRameeza Nasim