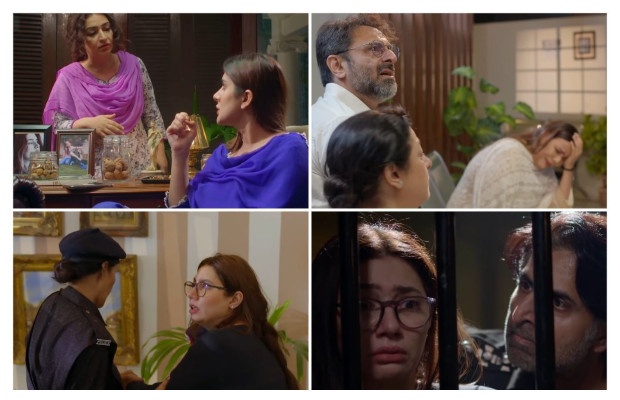 Hum TV’s Hum Kahan Kay Sachay Thay on airs its terrifying episode. Episode 9 is so upsetting, the play has turned extremely intense and depressing. In the previous episode, we have seen Mashal tearing and ruining Mehreen’s wedding dress dupatta. In this episode, it is shown that Mashal commits suicide but she has trapped Mehreen also into a greater mess by blaming her for her death!

The episode begins when Mashal tells Shaabo to keep food for Mehreen in the fridge. Later when she asks about the food she says that Mehreen has refused to eat then she tells her to throw away that food what does it mean? Food is poisoned!? Did Mashal actually try to kill Mehreen? Well, luckily Mehreen refuses to take the food as she has already had dinner at her khala’s place.

Mashal takes her own life but how it is not shown on screen, but she has written a letter or something in which she has named Mehreen Mansoor and that poor girl is now trapped into a greater mess. Mashal’s parents’ reaction is quite natural and within their character they are not ready to spare Mehreen and nor they are ready to forgive Aswad and his mother. It is an all-natural reaction.

However Poor Mehreen is in great trouble, no one is there to help her out. Literally, no one visited her in the lock-up. The police officer’s performance and his accent are such a turn off really annoying. Well, I was wondering male inspectors are allowed to investigate females suspects? Shaabo knows everything but she is silent. She knows that Mehreen has done nothing but still she stays silent and she does nothing to save Mehreen. Unfortunately, there is no one on poor Mehreen’s side nor her mother nor her khala cares to visit her in the lock-up. We feel very sorry for Mehreen.

The saddest part is that even Aswad believes that Mehreen might have killed Mashal. How dumb Aswad is! by Mashal’s parents’ reaction he has not judged that whatever they are doing is in spite and envy nothing else. They are also blaming Aswad and his mother too for Mashal’s death so are they really the culprit then why he is suspecting Mehreen to be a murderer? This is so absurd and unbelievable. If anyone is responsible for Mashal’s death then Aswaad is the only culprit he is the one who has raised her hopes and then crushed it still he has the audacity to blame Mehreen! Pathetic hero!

tweet
Share on FacebookShare on TwitterShare on PinterestShare on Reddit
Rameeza NasimSeptember 27, 2021
the authorRameeza Nasim
Rameeza Nasim, a Paralian, passionate about poetry, drama and fiction. By giving drama critiques I feel like I am endorsing the writer's message to the audiences, I love my job. Being a critic responsibility lies on my shoulders to point out the flaws and shortcomings of the play be it on writer's , performers or director's end . I did my Masters in English Literature and Linguistics .
All posts byRameeza Nasim