Mashal tries to demean Mehreen in front of Safwaan. 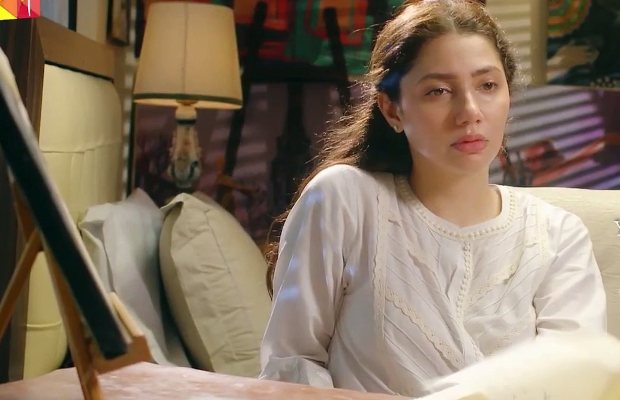 Hum Kahan Kay Sachay Thay, the Hum TV’s prime time weekend watch is loaded with powerful performances. Acting-wise it is Mahira Khan’s one of the strongest performances. In the previous episode, we have seen that how Mashal is demeaning Mehreen in front of Aswad, and in this episode, Mashal does not stop here, her never-ending jealousy has made her fall more from grace and she starts sending unknowing messages to Safwaan in which she is demeaning Mehreen.

Well, one wonders that in such a vulnerable situation Mehreen lives in, when her own room is not safe from Mashal then how come she dares to write her heart out in a diary and leaves that diary open at her table. Mashal after reading everything about Safwaan is getting more jealous of Mehreen she starts sending unknown messages and emails to him trying to demean Mehreen telling him about her past and her father’s past. It seems that there is no end to Mashal’s jealousy.

The good thing is Safwaan tells everything about those messages to Mehreen telling her that someone really envies her and he doubts that it must be a close family member. Mehreen gets disturbed, she is damn sure that it must be none other than Mashal. She asks Safwaan that if he can trace out the data of those messages and it proves that the sender is Mashal.

Aswad is shown to be the dumbest hero, he has no brain of his own. He sees Mehreen and Safwaan together dining out and there he starts blaming her in front of her mother for keeping boyfriends and later he confronts Mehreen directly getting a befitting shut up reply saying that he has no right to intervene in her life on which he so rudely and bluntly says “Just go to hell” on which she replies ” hell may hi tu hoon” which is so powerful yet heart touching line. It seems that this line has hit Aswad too.

Aswaad’s attributes are not heroic, while Safwaan is more of a gentleman and he is more like a knight in shining armor for Mehreen. As a viewer we feel that a dumb person like Aswad does not deserves Mehreen at all, she should marry Safwaan who despite getting continuous unknown messages and emails from Mashal has not paid any heed to those messages and he still blindly trusts Mehreen so Safwaan is the one who truly deserves Mehreen. However it seems that Mehreen has also set something in her mind, she wants to teach Mashal a lesson she will never forget.

tweet
Share on FacebookShare on TwitterShare on PinterestShare on Reddit
Rameeza NasimSeptember 6, 2021
the authorRameeza Nasim
Rameeza Nasim, a Paralian, passionate about poetry, drama and fiction. By giving drama critiques I feel like I am endorsing the writer's message to the audiences, I love my job. Being a critic responsibility lies on my shoulders to point out the flaws and shortcomings of the play be it on writer's , performers or director's end . I did my Masters in English Literature and Linguistics .
All posts byRameeza Nasim