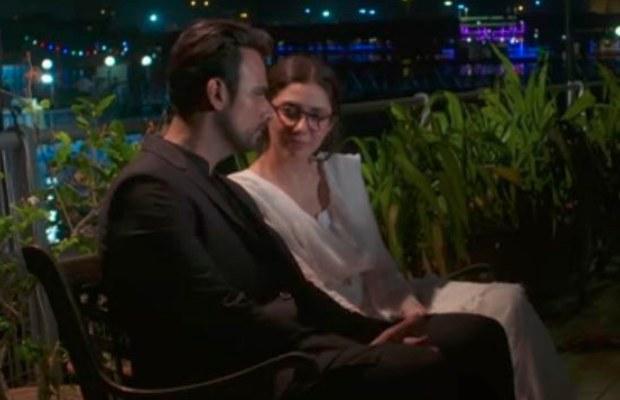 Hum Kahan Kay Sachay Thay the HUM TV drama serial finally comes to its conclusion. Although things have settled much in the second last episode and there is not much left for the last episode but all matters are solved well in the end. It’s a happy ending and as we are speculating, Mehreen Mansoor whole heartily forgives Aswaad and gives him a second chance.

The episode begins when Mehreen is telling Aswaad that Mashal has actually saved her from dying and she wishes that she would have saved her too. Well, I still stand by my criticism that if things have been settled between Mashal and Mehreen then why Mehreen is getting Mashal’s negative hallucinations all the time? Why she has been in that terrible state of mind. This all makes the plot flawed.

Aswaad asks Mehreen though not in an ideal way but he does apologize and asks her if she will give him a second chance? To our surprise, Mehreen does forgive him whole heartily and she also gives him a second chance. Well, critics might not like this ending as many sides with the view that Aswaad must not be forgiven after what he has done with her but in my view, Aswaad deserves a second chance, he is flawed but we all are flawed. To err is human.

Well, what Aswaad is doing after coming back is certainly redeems him, he supports Mehreen in all ways, encourages her to continue her studies. The way he is looking at Mehreen going back to her university and being happy with it speaks volumes about his character. Aswaad deserves to be forgiven. Mehreen’s scene with her mother is so heart-touching. She has finally been able to forgive her mother too and she has accepted that she has always loved her.

Mehreen wants to meet her Nani and Mammu Mumani, she asks Aswaad to take her there but he wants to save her from any bitter experience. Mehreen goes there alone and meets her Nani, Nani is so dependent on her son and daughter-in-law that she fearfully meets her. Shagufta wants to harm Mehreen but Mammu stops her. Mehreen moves forward and embraces her. Mehreen speaks her heart to them telling them that all her life she only longed for their love. She says that you have instilled hatred and jealousy between Mashal and her. Shagufta accepts that it is her fault. The play ends with a romantic scene of Aswaad and Mehreen where Aswaad is offering to share all her sorrows. Mahira Khan, Kubra Khan and Usman Mukhtar has given award winning performancesin Hum Kahan Kay Sachay Thay. Amazing direction by Farooq Rind, well-written script by Umaira Ahmed, brilliant performances, kudos to the entire team. Perfect ending! All well that ends well!

tweet
Share on FacebookShare on TwitterShare on PinterestShare on Reddit
Rameeza NasimJanuary 2, 2022
the authorRameeza Nasim
Rameeza Nasim, a Paralian, passionate about poetry, drama and fiction. By giving drama critiques I feel like I am endorsing the writer's message to the audiences, I love my job. Being a critic responsibility lies on my shoulders to point out the flaws and shortcomings of the play be it on writer's , performers or director's end . I did my Masters in English Literature and Linguistics .
All posts byRameeza Nasim