Shanaya and Azka getting married in this epiosde 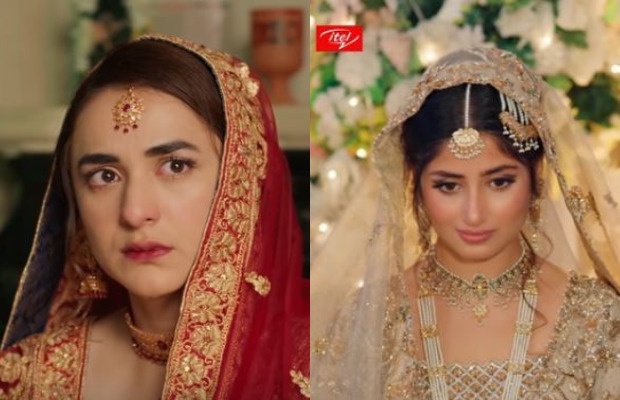 Ishq e Laa the Prime Time Watch at HUM TV has become quite a strong serial. This episode in particular is quite stronger. Azka and Shanaya both are getting married, both become brides but with an entirely different destinies. In the previous episode, we have seen that Azka’s bhabi and Abid planed to trap Azka and demean her in front of his brother’s eyes so he agrees to his marriage with Abid.

Abid with Kanwal and with help of his goons execute a plan to trap poor Azka. He poses in front of Sultan as if his sister is having a date with him later he shamelessly tells Sultan that he and Azka like each other. Moreover, Bhabi also denies Azka saying that she is lying, she is deliberately demeaning her in front of his brother.

Kanwal is so vile that when Azka’s mother confronts her and asks her to swear over her daughter if she is right, Kanwal is such a hard heart mother that she even falsely swears on her only daughter. Azka’s world turns upside down, she is broken that she has lost her trust in his brother’s eyes. Sultan is not ready to listen to Azka’s side he hastily fixes his nikkah the next day.

Azlaan has realized that Shanaya is not going to leave her world for him but he has also realized that his world is not complete without her and also for Shanaya Azlaan means a world to her. Well, Azlaan too very hastily decides to marry Shanaya the very next day which is not making any sense but it goes well with his character. He takes her for the shopping and God! the owner of 14 branches of the bank selects a very mediocre and okayish kind of jewellery. The production department should have invested at least they have taken us into a genuine gold jewellery shop instead of an imitation jewelry shop. When Azlaan says to the sales girl to show him the most expensive and best bridal set what she displays is just average stuff.

On the same day, Azka is also getting ready as a bride but her heart is broken, she feels hurt and betrayed by her bhabhi. She tells her bhabi that she has put her case in front of Allah. Our heart trembles when we think of her swearing falsely over her own daughter but Kanwal is a tough material she stays firm. We have seen that Shanaya and Azlaan’s nikkah happily takes place but when molvi sahab is asking Azka for her consent she remains quiet her silence is disturbing everyone but then we hear a loud scream at a distance. God forbid something bad happened with Sultan’s daughter?

tweet
Share on FacebookShare on TwitterShare on PinterestShare on Reddit
Rameeza NasimDecember 3, 2021
the authorRameeza Nasim
Rameeza Nasim, a Paralian, passionate about poetry, drama and fiction. By giving drama critiques I feel like I am endorsing the writer's message to the audiences, I love my job. Being a critic responsibility lies on my shoulders to point out the flaws and shortcomings of the play be it on writer's , performers or director's end . I did my Masters in English Literature and Linguistics .
All posts byRameeza Nasim