Shahzaib has fallen from grace once again 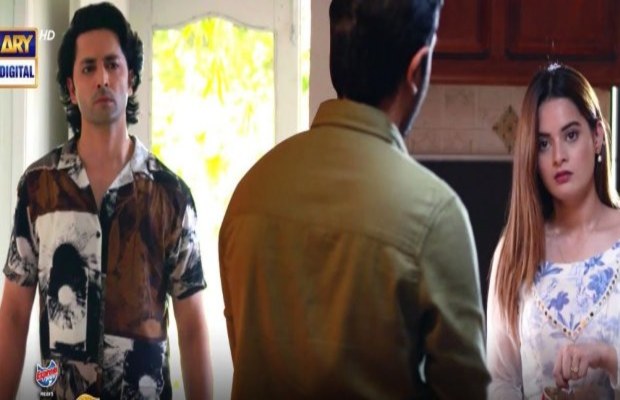 Ishq Hai the Ary digital drama serial which airs 4 episodes of the play every week has turned into a typical story that cliche plotting and doubting. In the previous episodes, we were seeing that Nimra, Samreen, and Haris are plotting to create differences in Isra and Shazaib’s relationship and in this episode we have seen that they are quite successful in it proving Isra and Shahzaib one of the dumbest lovers.

We have seen that it is a series of sending pics and videos to Shahzaib that usually follows up with a call from Haris. Isra is one of the dumbest heroines who not for a single moment realizes that Haris is the same obsessive stalker of hers who hounds her and follows her everywhere she goes then why doesn’t she tells and complains to her husband that Haris is bugging her all the time why she is always being so nice with Haris?

Hari’s toxic obsessiveness with Isra is not making any sense. The way he confesses in front of his cousin that he cannot back off from Isra and also that she means a world to him, not for a single moment Isra has ever shown him any interest in him. His love is purely one-sided then why he is being so toxically obsessive that he literally with the help of Nimra and Samreen ruins Isra’s marriage by trying to scandalize himself with her.

Not for a single moment, Shahzaib realizes that if it’s Haris and Isra’s combined thing then why Haris always sends him pictures and calls him. Does he not clearly see that Haris has made Isra a matter of his ego and also he is the one who is after her all the time? Shahzaib has fallen from grace by doubting his love and also by literally throwing Isra out of his house not realizing that he is the one who marries her at gun point and he is the one who has literally ruined her life and reputation now he has the audacity to doubt her?

Isra is really ruined as her bhabi has not welcomed her in the house and she spares no moment to insult her and does her character assassinates all the time. Isra is shown too dumb that when her husband trashes her with Haris then why she is being kind and nice to him? why she visits his house along with his mother? Why she is working in their kitchen? Isra is too dumb and she is providing Shahzaib ample amount of material for doubting her. Shahzaib says that he is not going to divorce her nor he will keep her. Let’s see where this relationship leads to?