Isra is not ready to file for divorce 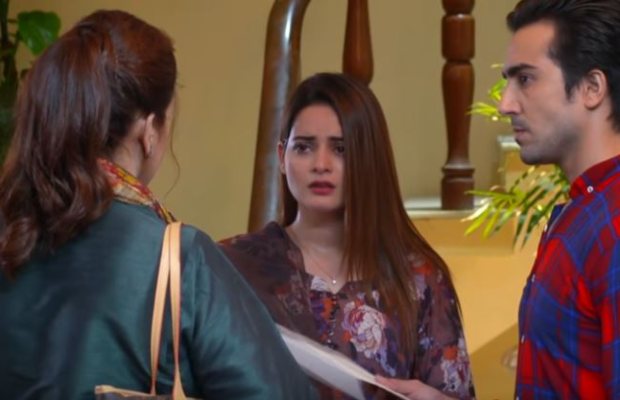 ARY Digital’s drama serial Ishq Hai is one of the most trending drama serials. Ishq Hai has turned quite depressing since when Shahzaib has started doubting Isra. Shahzaib’s doubt has ruined his relationship and moreover Samreen, Nimra and Haris are making sure that they deepen Shahzaib’s doubts. In the previous episodes, it is shown that Shahzaib throws Isra out of his house, and in these episodes, it emerges that he has decided to marry Nimra but he says he will never going to divorce Isra.

Nimra and Samreen parents die in an accident. They hardly take proper time for mourning their parents’ death then they are back on track plotting against Isra. There are repeated series of scenes adding misunderstandings and doubts between Isra and Shahzaib. Shahzaib decides that he will marry Nimra and moreover he says that he will never divorce Isra and this is her punishment.

The scene where Shahzaib’s mother goes to Isra’s house to give her Nimra and Shahzaib’s wedding card is so all over the place. Raza is the only sane voice in the house, Shahzaib is so dumb and so is Isra who cannot see Haris’s intentions. Haris tells Hammad that he still wants to marry Isra never ever have Hammad realized that Haris and his wish to marry Isra is so inappropriate in these circumstances when Isra is still in Shahzaib’s nikkah.

Instead of snubbing Haris, Hammad is considering his proposal for Isra not realizing that Isra is not yet divorced. Then he tries to convince Isra that she should forget Shahzaib as he forgets her. Hammad is insisting Isra sign on divorce papers, her mother also wants this. Isra is about to sign the papers but then there is a change of mind she says that before asking for divorce she wants to prove her innocence, she says she does not want to know how but she is going to prove her innocence for sure.

Well, there are too many accidental deaths shown in this play now this time Haris’s mother’s plane gets crashed and it does not seem that he is in a state of shock or grief. Soon after his mother’s funeral, he is still back to his toxic obsession with Isra and when his cousin tries to put some sanity in his head he tells her about his plotting and teaming up with Nimra and Samreen. Isra comes to know that it is none other than Haris who has ruined her house. She confronts him and slaps hard on his face.

tweet
Share on FacebookShare on TwitterShare on PinterestShare on Reddit
Rameeza NasimSeptember 8, 2021
the authorRameeza Nasim
Rameeza Nasim, a Paralian, passionate about poetry, drama and fiction. By giving drama critiques I feel like I am endorsing the writer's message to the audiences, I love my job. Being a critic responsibility lies on my shoulders to point out the flaws and shortcomings of the play be it on writer's , performers or director's end . I did my Masters in English Literature and Linguistics .
All posts byRameeza Nasim