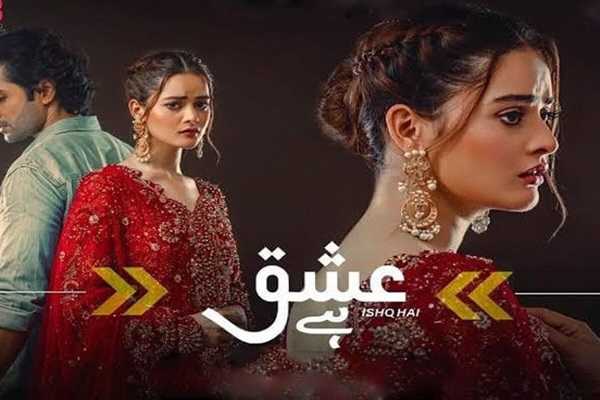 Ishq Hai drama serial running at ARY Digital, a Big Bang production, is based on mad love and over possessiveness and its disastrous consequences. Ishq Hai is a modern tragedy that begins after the union of the lovers the way Shazaib and Isra unite, bring disastrous outcomes for both. The play is written by Rehana Aftab and it is executed by Aabis Raza. Having Danish Taimoor, Minaal Khan, Azeekah Daniel, Babar Khan, and others in the cast.

The story premises initially seems quite traditional where both families of Isra and Shahzaib are not ready to accept them. It is shown that Isra is quite pampered by her father and her brother but later when she refuses to marry the boy her family suggests the same brother and father starts doubting her. It Isra’s right to marry the boy he wants, it is her religious and social right but culturally it seems incorrect for a girl to choose her own life partner why? Isra dares to tell her family that she likes someone and it seems to be her biggest mistake.

Again the play is highlighting a very important issue of forced marriages. Poor Isra is being punished by her father and brother and she is about to go for a forced marriage to a boy she does not like and we have seen later that the boy is a trouble creator too. He used to tease Shahzaib by sending his selfies with Isra. Shahzaib cannot stand the fact that Isra marries him, he is extremely possessive about her. Shahzaib’s mother is also forcing him to marry the girl of her choice.

Shahzaib kidnaps poor Isra at the wedding night from the Salon and he forced her to marry him. His obsessive and toxic threatening behavior succeeds him in doing Nikkah with Isra. Poor Isra begs him to leave her as she is afraid that her father will not stand this disgrace. She is rightly thinking that we have seen that her father takes all this at heart and dies.

Shahzaib’s over possessiveness has ruined Isra’s whole life. Her father has cursed her and she lost her father forever, she lost her reputation and her dignity in front of the world, moreover, she lost her love of life. Her family is hating her. She has started hating Shahzaib and she has all good reasons for that. Shahzaib is feeling extremely guilty but now it’s too late. Shahzaib himself facing outcomes of his own conduct, his mother has disowned him from his house and property, and also his own brother is angry with him as he is supposed to marry his brother’s fiance. What will be the future of Sahzaib and Isra’s relationship?

tweet
Share on FacebookShare on TwitterShare on PinterestShare on Reddit
Rameeza NasimJuly 16, 2021
the authorRameeza Nasim
Rameeza Nasim, a Paralian, passionate about poetry, drama and fiction. By giving drama critiques I feel like I am endorsing the writer's message to the audiences, I love my job. Being a critic responsibility lies on my shoulders to point out the flaws and shortcomings of the play be it on writer's , performers or director's end . I did my Masters in English Literature and Linguistics .
All posts byRameeza Nasim