Isra's family is not ready to forgive her 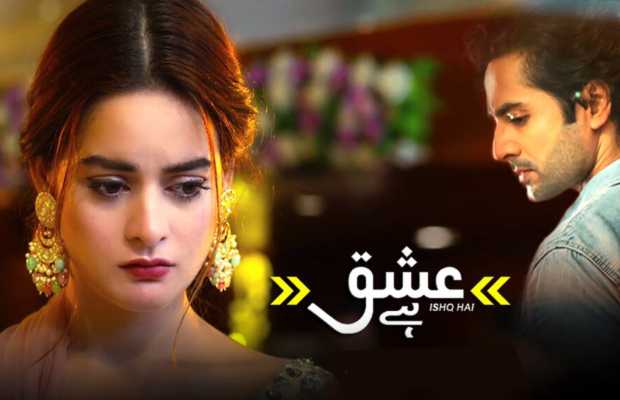 Ishq Hai airing at ARY Digital is a tale of disastrous consequences of obsessiveness love and over possessiveness. Shahzaib’s over possessiveness has ruined Isra’s life and reputation. In the previous episodes, we have seen Isra hating Shahzaib for forcefully marrying her because of which she has lost her father.

Isra ex-fiance’s behavior is now not making any sense. If we analyze the whole situation, the actual culprit for Shahzaib’s action, his teasing and his show offing is the actual cause behind Shahzaib going to that extend and he is still trying to make Isra’s brother loose cool by taunting him about Isra’s elopement and about Shahzaib and her appearance in the funeral. What is his actual motive? is he still hoping to win Isra back? Well, Isra does not deserve this creep.

Shahzaib is trying hard to win Isra’s love back but Isra is resolute that she will make Shahzaib’s life hell. Apart from all the toxic background their relationship had, the passion between Shahzaib and Isra is still so powerful. Shahzaib once again goes to Isra’s brother’s house to tell them that Isra has no hand in their elopement but not for a single time he tells them that he had actually abducted her that night and forcefully married her. Shahzaib’s labor of saying “Isra ka koi qasoor nahi” and getting beaten in return, all these efforts are futile when he does not have the guts to utter that he has actually kidnapped her that night.

We have always seen Azeekah Daniel in positive roles and for the very first time I am watching her character portrayed in a negative light and it does not go well with her soft looks.  Will Isra’s heart going to melt for Shahzaib? Will Shahzaib will ever be successful in winning Isra’s love back? Or Isra will stay with his words and will make Shahzaib’s life hell.

tweet
Share on FacebookShare on TwitterShare on PinterestShare on Reddit
Rameeza NasimJuly 21, 2021
the authorRameeza Nasim
Rameeza Nasim, a Paralian, passionate about poetry, drama and fiction. By giving drama critiques I feel like I am endorsing the writer's message to the audiences, I love my job. Being a critic responsibility lies on my shoulders to point out the flaws and shortcomings of the play be it on writer's , performers or director's end . I did my Masters in English Literature and Linguistics .
All posts byRameeza Nasim