Ishq Hai Episode17-20 Overview: Things between Isra and Shahzaib have been settled

Isra tears up the divorce papers in front of Shahzaib 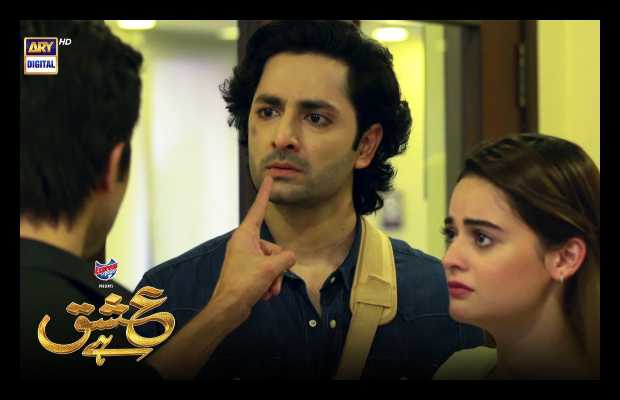 ARY Digital’s drama serial Ishq Hai airs twice a week now, the story has moved a lot in these episodes. Things between Isra and Shahzaib have been settled. In these episodes, Isra refuses to take divorce from Shahzaib and her heart starts beating for him once again.

Isra meets her mother for the very first time in the hospital and there Thank God Shahzaib for the first utters the exact fact that it is he who has actually kidnapped Isra and forced her to marry him at gunpoint. Well, Isra’s brother does not seem to move a bit from that and it seems he still does not believe his sister otherwise he would not put such a condition that if it is true then Shahzaib should divorce her immediately. Shahzaib assures him that divorce papers are ready but he do not have the courage to divorce her in person, he will divorce her soon.

Isra is feeling very bad but she has hardened her heart and she does not utter a single word. Her heart beats for Shahzaib but she does not have the courage to tell him not to divorce her but then her mother calls her. Isra’s mother is talking sense, she is saying the right things but in a very absurd and bad manner. She tells her that whatever happened Shahzaib is now her husband and she cannot afford a divorce label. Isra follows her mother and she tears up the divorce papers in front of Shahzaib.

Well, there we also see Haris’s toxic obsession with Isra, he is still after her and as a true loafer, he is waiting for her divorce from his brother. What kind of toxic character his brother is? He wants his sister’s life ruined? How can he think to marry her off with a person like Haris who comes to meet Isra at his place thinking that he must have gotten her divorce? He is continuously bothering and threatening Isra. Another toxic obsessive lover female version is Nimra who literally has zero self-respect.

Isra has come with Shahzaib to live in his house but it seems to be her biggest mistake as Shahzaib’s mother has never accepted her ever, she is so cunning that she pretends to be all nice in front of his son but in reality when she is alone with Isra she never spares her with her taunts. She even does not give her family jewellery. Shahzaib’s brother gets married and his bride Samreen is now all set to make Isra’s life hell and she will take her sister’s revenge. Samreen is plotting something very strategic in her head. Will Shahzaib be able to save Isra from all such plottings going in his house?

tweet
Share on FacebookShare on TwitterShare on PinterestShare on Reddit
Rameeza NasimAugust 11, 2021
the authorRameeza Nasim
Rameeza Nasim, a Paralian, passionate about poetry, drama and fiction. By giving drama critiques I feel like I am endorsing the writer's message to the audiences, I love my job. Being a critic responsibility lies on my shoulders to point out the flaws and shortcomings of the play be it on writer's , performers or director's end . I did my Masters in English Literature and Linguistics .
All posts byRameeza Nasim