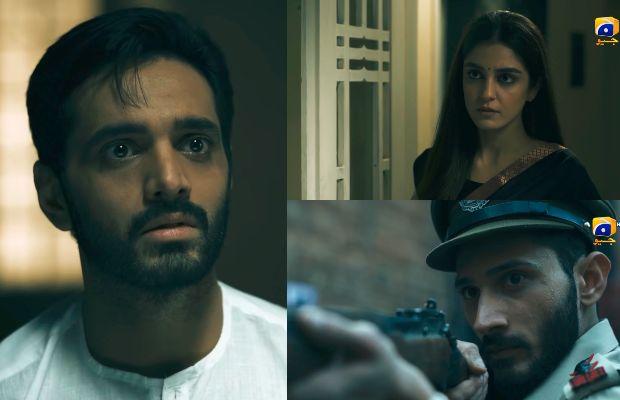 Geo Entertainment’s Jo Bichar Gaye is a series for which we desperately wait for the whole week. With excellent storytelling, Haisam Hassan has nailed this masterpiece with his brilliant execution. Performances are also flawless. In the previous episode we have seen riots going all over Dhaka in which they are targeting West Pakistanis. In this episode too survival of West Pakistanis is becoming difficult in 1971 East Pakistan.

Life for West Pakistanis has become a nightmare in 1971 Dhaka, Bangali freedom fighters have turned into a beastly mob who has eyes but they only see West Pakistanis, they pick them and are brutally killing them in the name of revolution. Not just for common people, West Pakistani Army officers are also facing the same treatment their survival has also become difficult. Food supplies have banned for them. The market is also a kind of boycotting them.

Our heart goes out for poor Rumi who being an idealist, a romantic sees his very own revolution turning into a bloody anarchy. He has never wanted bloodshed of innocent people. Rumi is also being rudely treated by his chachi. The way she exerts all her anger on him for leading her son into the riots. Rumi is clearly seeing that things and events are going in the wrong direction but he is helpless he cannot do anything.

Captain Farrukh is facing real tough time in Dhaka, cashier refuses to cash his salary cheque. Army officers are not getting proper food supplies and market has kind of boycotted them. Admits of all this chaos Captain Farukh remembers Mrs Shabnum invitation of dinner and he badly wants to go there. Risking his and Capt Siddique’s life he reaches at Maya’s house. Maya and Rumi’s chemistry is lit but we see that Maya has feelings for Capt Farukh too. Poor Capt Farukh gets to eat good food after quite a long time.

Rumi is getting extremely envious and uncomfortable in Capt Farrukh’s presence. Our heart goes out for the poor Rumi but it does not mean we like Captain Farukh any less. However we are rooting for Maya and Rumi. Despite of all jealousy Rumi is a kind heart person he saves Capt Farrukh from Mukhti Bani mob who comes at Maya’s place to kill him. Capt Farrukh has to stay for a night at Maya’s place he shares the room with Rumi. Things are getting worse at Army mess food supplies have been banned for them, an army officer goes at Dhaka Market to get some supplies for the mess but he gets shot.

tweet
Share on FacebookShare on TwitterShare on PinterestShare on Reddit
Rameeza NasimJanuary 18, 2022
the authorRameeza Nasim
Rameeza Nasim, a Paralian, passionate about poetry, drama and fiction. By giving drama critiques I feel like I am endorsing the writer's message to the audiences, I love my job. Being a critic responsibility lies on my shoulders to point out the flaws and shortcomings of the play be it on writer's , performers or director's end . I did my Masters in English Literature and Linguistics .
All posts byRameeza Nasim