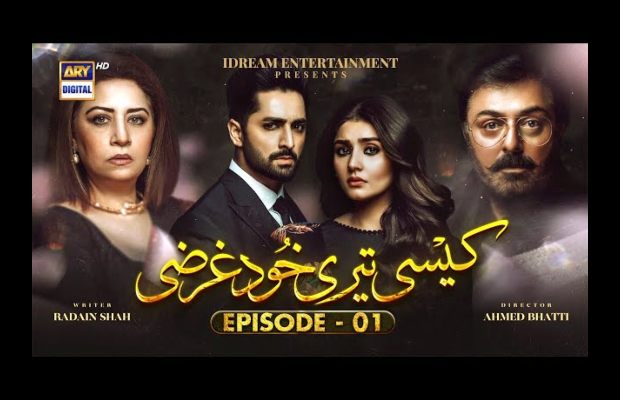 Ary Digital’s newly started drama serial Kaisi Teri Khudgarzi aired its first episode. The narrative is built from the beginning that it is a story about the class disparity, obsessive/toxic love, and moreover a perfect portrayal of autocratic behavior. The story is penned down by Radain Shah of Meri Guriya fame and it is directed by Ahmed Bhatti. Kaisi Teri Khudgarzi features Danish Taimor, Dur e Fishaan, Nouman Ijaz, Hammad Shoaib, Shahood Alvi, Laila Wasti, Atiqa Oddo, and others in the lead cast.

We are introduced to a happy family, having two daughters Mahek and Nida, a caring mother and a supportive father who wants them to become strong and independent women. Mahek is engaged with her cousin Ahsen and they belong to a middle-class family. However, they are content with their life till on a misfortune day Mahek and his father’s path crosses with Shamsher.

Well, as far as the performances are concerned they are brilliant. However; in a few places, dialogues seem really weak, especially in the sister’s scenes the dialogues and lines are too cliched. Shamsher and his autocratic attitude are perfectly done.The road scene reminds us of so many true-life incidents. Danish Taimoor has really nailed his character with his brilliant performance. He seems effortless in this character and his character is a bit similar to his Ishq Hai character but he has changed his look and has put the effort into his character portrayal.

Another classic example of autocracy and feudalism is Nauman Ijaz’s character, as a ruthless feudal who is in a state of an absolute power and he is literally robbing people of their properties and rights. Again it is such a true depiction of the feudalistic mindset of which we find examples in our real world. The way the feudal captures the hotel property by exhibiting his power, offering him peanuts in return, and then also deprives him even from the cheaque he has offered him before speaks volumes about his ruthlessness.

Shamsher the spoiled richie rich brat has only two sports in life and that is having drugs and
displaying his power by abusing others. However, when he is pointing a pistol at Mahek’s father and she intervenes requesting him not to shoot his father, she takes his heart away. He fells obsessively in love with her. Mahek’s video goes viral but it does not affect her nor her family which seems odd. Shamsher traces her through the video and he goes straight to Mahek’s house along with his guards. He has the audacity to face her father who is the same man he was pointing the pistol at the other day! A promising start!

tweet
Share on FacebookShare on TwitterShare on PinterestShare on Reddit
Rameeza NasimMay 12, 2022
the authorRameeza Nasim
Rameeza Nasim, a Paralian, passionate about poetry, drama and fiction. By giving drama critiques I feel like I am endorsing the writer's message to the audiences, I love my job. Being a critic responsibility lies on my shoulders to point out the flaws and shortcomings of the play be it on writer's , performers or director's end . I did my Masters in English Literature and Linguistics .
All posts byRameeza Nasim