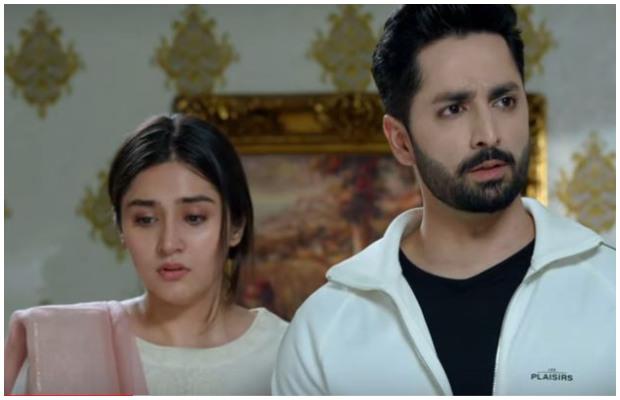 Ary Digital’s drama serial Kaisi Teri Khudgarzi is a play with a problematic narrative, despite being an engaging serial it becomes problematic when this toxic obsessive behavior is glamorized as passionate love. Performances are on spot. In the previous episode, we have seen that Shamsher is very caring towards Mahek and he pays Mahek’s father’s hospital expenses. In this episode, it is shown that Shamsher is fighting for Mahek’s status and position in the house.

The episode’s opening scene is when Mahek calls Shamsher’s name and he is spellbound to hear his name from her mouth. She tells him that he has to go with her to the hospital and he gets ready to take her.

Well, I don’t understand why he stopped his car in front of the shop before going to the hospital. Mahek is waiting in the car when Sophia sees her and gets mad. As our characters in the play particularly if they are females are shown so devoid of self-respect so Sophia is not an exception she starts blaming Mahek for taking her place and also lies that they both like each other. She is being stopped by Shamsher who snubs her by saying that he never liked her all her liking is one-sided.

Mahek goes to the hospital where she comes to know that it is Shamsher who has cleared all bills and he also bears the operation charges. Instead of being moved to hear this Mahek is annoyed that why her family has taken money from him. It looks so odd and unnecessary when Mahek’s mother starts taking Shamsher’s side by saying that he seems a nice guy and also suggests her daughter to settle down with Shamsher. No way Mahek does not deserve Shamsher at all! He forcefully married her how come his this act of kindness can absolve him from his sins?

Shamsher is also worried about how to win Mahek’s love and attention but he does not do any effort for that. He also wants to give her equal status and position in the house as Baba Sahab is not ready to accept Mahek at all. Sophia once again comes across Mahek and this time again as she has zero self-respect she starts blaming and taunting Mahek which again Shamsher witnesses. This time he drags Sophia from her house and brings her to his house so that she can beg forgiveness from Mahek. Even Mahek gets disturbed by this scene. Mahek asks Shamsher why he always creates such scenes with her. There is no way Mahek will fall for Shamsher.

tweet
Share on FacebookShare on TwitterShare on PinterestShare on Reddit
Rameeza NasimAugust 24, 2022
the authorRameeza Nasim
Rameeza Nasim, a Paralian, passionate about poetry, drama and fiction. By giving drama critiques I feel like I am endorsing the writer's message to the audiences, I love my job. Being a critic responsibility lies on my shoulders to point out the flaws and shortcomings of the play be it on writer's , performers or director's end . I did my Masters in English Literature and Linguistics .
All posts byRameeza Nasim