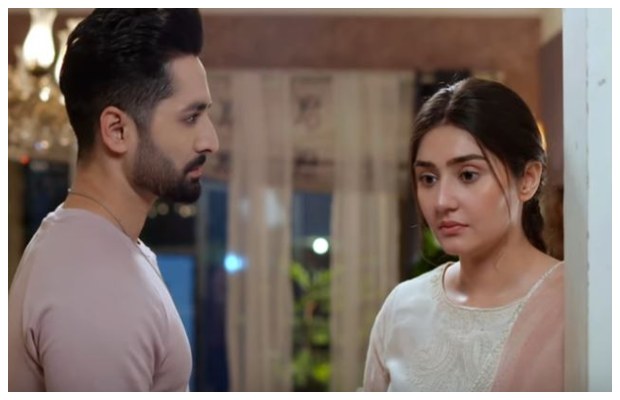 ARY Digital drama serial Kaisi Teri Khudgharzi is going strong in terms of gaining views but as a story, it is quite dragging. There is not much that happened in this episode. Performances are on spot as usual. In the previous episode, we have seen that Shamsher fights for Mahek’s position in the house. In this episode, it is shown that Shamsher is still fighting for his wife’s rights and he is also trying to win Mahek’s heart.

Shamsher is furious with Sophia for misbehaving with Mahek, he drags her out of her house to his own house so that she can beg forgiveness from Mahek. Sophia and Farwah create such a scene and Farwah further insults Mahek while Shamsher has tried hard to fight on her behalf. Mahek ends all this by begging Shamsher to stop and let it go. Farwah’s father especially visits Shamsher’s father but Nawab Sahab remains unmoved.

Shamsher is trying hard to win Mahek’s heart but Mahek is not ready to forgive and forget whatever he has done with her. Shamsher being nice and caring towards her does not absolve him from all his sins. He certainly does not deserve Mahek and we are not rooting for them as a couple. Well, it looks so strange when Mahek’s own mother and sister think that Shamsher is not a bad guy. But how come? that guy has literally forcefully married her daughter still she thinks he is a good guy!

Ahesun meets Mahek and talks with her when Shamsher intervenes and he then tries to tell him in his own way never to talk with Mahek again. Well, Ahesun says he is going to do whatever his heart will say. Sophia and Farwah are cooking something in their head, particularly Sophia has some solid plan in her mind to throw Mahek out of the house. Well, little does Sophia knows that this passion of Shamsher has no end! Will Sophia succeed in her plotting against Mahek? Slow-paced episode!

tweet
Share on FacebookShare on TwitterShare on PinterestShare on Reddit
Rameeza NasimSeptember 1, 2022
the authorRameeza Nasim
Rameeza Nasim, a Paralian, passionate about poetry, drama and fiction. By giving drama critiques I feel like I am endorsing the writer's message to the audiences, I love my job. Being a critic responsibility lies on my shoulders to point out the flaws and shortcomings of the play be it on writer's , performers or director's end . I did my Masters in English Literature and Linguistics .
All posts byRameeza Nasim