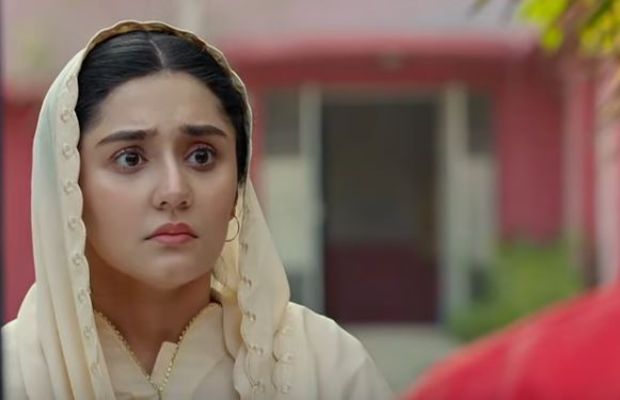 ARY Digital drama serial Kaisi Teri Khudgharzi is now down with 6 episodes, it seems that the story is going round and round. It is a vicious circle of Shamsher hounding Mahek’s family his obsession for her seems never-ending. In the previous episode, we have seen that Mahek’s family flees from their home hiding from Shamsher. In this episode, Shamsher finds out about Mahek and reaches her new place scaring the hell out of her.

Mahek and her family have left with no choice but to leave their place and hide somewhere. They have come to live with their khala in their house. Well, it is great of Mahek’s khala to let them stay at their place after knowing what the family is going through. They have hidden for a few days successfully and we have seen them celebrating Mahek’s birthday.

Shamsher’s world turn upside down when he comes to know that Mahek is missing. He tries to investigate through her chacha but to our surprise, he has not inquired from him in a strict way he just casually asked in an aggressive tone and leaves him when he says he does not know where they have gone. It was expected that Shamsher will pressurize or threaten her chacha to get his answer but he do not commit any such thing.

Mahek’s absence is disturbing Shamsher, his obsession seems never-ending. The way Shamsher is pursuing Mahek, going to her university, bribing the principal to get any information about Mahek. The scene where Shamsher goes in front of the examination center of Mahek’s sister is so bone-chilling. Mahek’s sister is so naive that she gets shocked and freezes when he sees her and this is her expression that has caught Shamsher’s attention. Well, she still somehow manages to dodge Shamsher as she is wearing a burka.

The way Shamsher gets his way to Mahek is quite far-fetched. Mahek’s khala does online food delivery business. Mahek helps her aunt and writes a few lines on the pack of the sandwiches. Shamsher recognizes her handwriting immediately and telly it with her handwritten application. Well, one wonders why he has kept her handwritten application with him? Shamsher is damn sure that it is Mahek who has written this and he tracks the rider to get their address. Mahek and her family are already upset about Shamsher’s hounding little they know that the knock at the door is by him. Shamsher’s entry scares the hell out of Mahek. It seems that Mahek’s family will have no choice but to marry her off to Shamsher.

tweet
Share on FacebookShare on TwitterShare on PinterestShare on Reddit
Rameeza NasimJune 16, 2022
the authorRameeza Nasim
Rameeza Nasim, a Paralian, passionate about poetry, drama and fiction. By giving drama critiques I feel like I am endorsing the writer's message to the audiences, I love my job. Being a critic responsibility lies on my shoulders to point out the flaws and shortcomings of the play be it on writer's , performers or director's end . I did my Masters in English Literature and Linguistics .
All posts byRameeza Nasim