What are the right choices for Sara and Bilal to make in their dilemma? 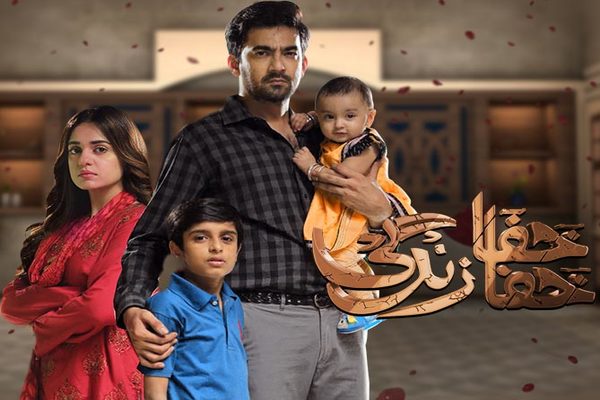 Khafa Khafa Zindagi is written by Kifayat Rodani and produced by Sadia Jabbar Productions, which is well-known for its signature dramas with strong stories that discuss existing problems and dilemmas faced by both men and women in our society.

The cast includes Sumbul Iqbal as Sara and Ali Safeena as Bilal. The story starts off with an unusual bang and the couple is eager to get divorced due to financial problems and the frustration rising out of it. It is a story line that relates to so many people, who go through similar situations and face the similar difficulties due to cultural and societal pressures. In this drama the sensitive topic of divorce has been raised and discussed from a religious point of view as well. The effects of such unfortunate situations on children who are living with a single parent have also been shown with delicate precision.

In the 7th episode of Khafa Khafa Zindagi, both Sara and Bilal are depressed and miserable but for different reasons, Sara as a mother is sad and wants to busy herself so that it takes her mind off from her children, whereas Bilal is seen struggling to make both ends meet, searching for employment and managing work and children at home. He cannot leave his kids alone at home and has to take them to every job interview he has, because of which no organization is ready to hire him. With this entire situation going on, the land lord arrives at Bilal’s and asks him to leave the house immediately, as he had not paid long due rent. Bilal pleads with the landlord for some more time, but the land lord gets abusive and Bilal loses his temper too; both of them get into a fight and Bilal gets hurt, all this happens in front of the children and they get frightened and ask their father to stop.

On the other hand Sara lands a job at her mother’s friend’s organization, but receives a shock when she sees Abid, Bilal’s friend working there as a manager. She feels she cannot continue under his authority as he knows the circumstances and she will not be emotionally safe around him. Also he is aware of her weakness regarding her children.

The drama has been beautifully crafted by Sadia Jabbar produtions and played exceptionally by all the artists. One cannot help feeling sorry for Sara, Bilal, Gulzar and Khirad, suffering individually under similar circumstances. How will the story turn out now that we see Sara and Bilal are both knitted tightly to their egos? Will Bilal eventually get a job? Will Sara feel less guilty and depressed without her children? How will Gulzar adjust to the fact that Sara has left him and the children forever? All this and more to look forward to in the next episode!

tweet
Share on FacebookShare on TwitterShare on PinterestShare on Reddit
Saman SiddiquiOctober 19, 2018
the authorSaman Siddiqui
Saman Siddiqui, A freelance journalist with a Master’s Degree in Mass Communication and MS in Peace and Conflict Studies. Associated with the media industry since 2006. Experience in various capacities including Program Host, Researcher, News Producer, Documentary Making, Voice Over, Content Writing Copy Editing, and Blogging, and currently associated with OyeYeah since 2018, working as an Editor.
All posts bySaman Siddiqui